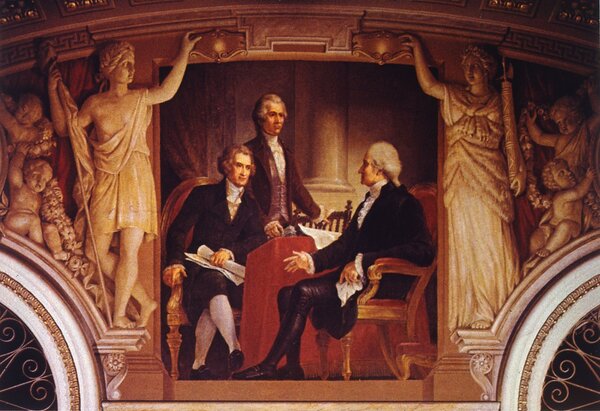 There was nothing inevitable about the creation of the United States — the United States, singular, that is, a continental nation-state with a central government, rather than these United States, plural, a collection of small, quarrelsome quasi republics connected by a weak treaty of friendship. In fact, the path to the nation as we know it, with a powerful executive, a representative legislature and an independent judiciary, was highly implausible. For the 13 states at the time of the Revolution — mini-nations that had their own currencies, their own foreign policies, their own navies — the quest for independence was not just freedom from an imperial Britain, but independence from one another. America could have very easily looked like a bigger, more dysfunctional European Union.

In these two masterly works, the great historians of America’s Revolutionary era, Gordon S. Wood and Joseph J. Ellis, show how this experiment in republican self-government almost didn’t happen. As Ellis writes in “The Cause,” there was always far more emphasis on pluribus than unum, on the many rather than the one. The original demand of The Cause (the historical term for the Revolutionary War) was actually conservative: Give us our due rights under British law. Nationhood was not the goal. People saw themselves as Virginians, Rhode Islanders, New Yorkers — not Americans. How the many became a fractious one is the story these two books tell. They both suggest that it was only the creation of the Constitution in 1787 that made these disparate citizens into Americans.

But Ellis and Wood are not triumphalist about the Constitution. They each underscore that the signers failed to deal with some awfully big problems. They both assert that the deepest flaw was the failure to purge the new nation of the evil of slavery, and that error, more than any other, betrayed the values on which America was founded. Each of them writes that many of the same difficult questions that almost prevented the Union from coming into being 234 years ago — bondage versus emancipation, big government versus small, city versus country, individualism versus communitarianism — still divide us today. Back then, the anti-Federalists protested that creating a strong national government was just substituting one form of tyranny for another. Whether they know it or not, the governors who now reject federal mask mandates are echoing the anti-Federalists of the 1780s.

“Power and Liberty” is based on a series of lectures that Wood, a professor emeritus at Brown and a Pulitzer Prize winner, gave at Northwestern University in 2019. They were a summing up of his life’s work and the book has an elegiac quality along with his customary clarity. Wood sees the half-century from the 1760s till the early 1800s as “the most creative period of constitutionalism in American history and one of the most creative in modern Western history.” In “The Cause,” Ellis, also a Pulitzer Prize winner and a professor emeritus at Mount Holyoke, tells the complementary story of the “prudent” Revolutionaries who won the war but weren’t quite sure what to do next. Like Wood, he deftly foreshadows all the issues that would complicate America’s trajectory and ends with a historical cliffhanger: Would the Republic survive? It did, but only when the Constitution became the embodiment of The Cause.