WE ARE THE NERDS
The Birth and Tumultuous Life of Reddit, the Internet’s Culture Laboratory
By Christine Lagorio-Chafkin
Illustrated. 492 pp. Hachette Books. $28.

Five years ago, it seemed like a swell idea for Mark Zuckerberg to connect every human being on the planet, because we would all sit around singing “Kumbaya” and ordering from Amazon. Journalists revered Twitter for giving a megaphone to oppressed groups like, well, journalists. Google, figuring it had solved the problems of the living, launched a venture to defeat death.

Founded in 2005, soon after Facebook, Reddit has always been something of an anomaly among companies whose content was generated by users. Its founders, barely out of their teens, had no real vision. It wasn’t even their idea. They cashed out as soon as they could. The buyer was Condé Nast, home of America’s toniest magazines, but executives there had no vision either. Reddit was created by millions of Americans with a taste for darkness. You can’t blame this one on Vladimir Putin.

In the beginning, Reddit users simply shared links about interesting things they read. Then comments were added. The job of moderating was assigned to anonymous volunteers, who created and shaped “subreddits” to their own passions. This was a genius move: It allowed Reddit not only to keep its staff lean, but to distance the company from the sleazier content.

Christine Lagorio-Chafkin, a writer for Inc. magazine, tells the Reddit story in “We Are the Nerds.” The two co-founders, Steve Huffman and Alexis Ohanian, cooperated extensively. I admire them for doing so because despite Lagorio-Chafkin’s best efforts — Ohanian is called “charismatic” or celebrated for his “charisma” on Pages 47, 158, 214, 223 and 330 — they come off as whiny and callow schemers, and not the sharpest of sticks. On the very first page, the two University of Virginia seniors cannot figure out what a “kiosk” is. 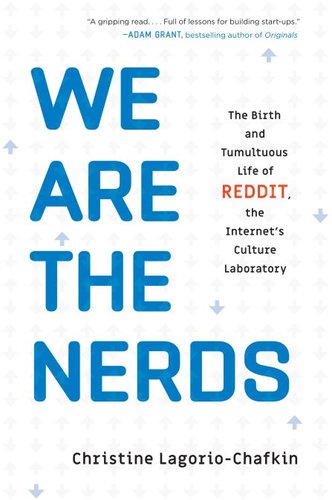 The title “We Are the Nerds” doesn’t really fit the tale. “We Are the Trolls” would have made much more sense. “I was always kind of an [expletive],” Huffman explains early on. Lagorio-Chafkin bluntly calls him “a total troll.” He was also a genius programmer. The great achievement of the social internet was to unleash jerkdom for many while monetizing it for a few.

The Reddit tale is an indictment of Silicon Valley, something Lagorio-Chafkin seems to sense but never confronts head-on, perhaps because she is so grateful for access to Huffman and Ohanian. “Two nice guys who made it, by crafting something incredible and yet ridiculously unwieldy, with no lack of turbulence along the way,” Lagorio-Chafkin writes in an author’s note. A more accurate summation might be: “Two inexperienced young guys created something they didn’t understand and couldn’t control.”

It’s all here anyway: the lack of adult oversight; the suck-up press; the growth-at-any-cost mentality; the loyal employees, by turns abused and abusive (memo from management: “You do realize you were talking about penises for 90 minutes, right?”); the defense of horrendous behavior as “free speech”; the jettisoning of “free speech” when it served corporate purposes; the way no one seeks permission but all expect forgiveness.

“We Are the Nerds” is most compelling when it tells the story of a third young man who played a founding role at Reddit. Aaron Swartz was brilliant, troubled and impossible, but he saw the tech economy more clearly than well-medicated people. “In the old days the new money was made through theft and abuse of office,” he wrote. “Now any random computer programmer — or even the people who hung around them — could find themselves saddled with a pile of cash.” In early 2013, hounded by the government over a stupid stunt involving the downloading of academic journals, Swartz committed suicide.

The charismatic Ohanian came back as well, trying a few Reddit spinoffs that fizzled. He is best known now for being Mr. Serena Williams. I wondered if any of his new relatives ever asked him about the popular subreddit called CoonTown — you can guess the contents — but “We Are the Nerds” is silent on this. CoonTown was finally banned by Reddit in 2015.

While writing this review, I poked around Reddit. I saw some naked women, read some unusual opinions (“Just ignoring all the horrific atrocities caused by the Nazis, the Nazi flag actually looks pretty decent”), had a few laughs at youthful sexual confessions. It was pretty benign. Maybe the site is no longer so toxic, or maybe the toxic internet has made me numb.

I also saw a lot of ads. Reddit is worth about $2 billion, which means Advance Publications, the parent of Condé Nast and now Reddit’s biggest investor, made good money. In Silicon Valley, that’s still pretty much all that matters.

David Streitfeld covers Silicon Valley for The Times. He is the editor of an updated edition of “David Foster Wallace: The Last Interview.”