The Nobel laureate, whose new novel, “Chronicles From the Land of the Happiest People on Earth,” is his first in nearly 50 years, refuses to back down when he senses that his homeland’s freedom is under threat. 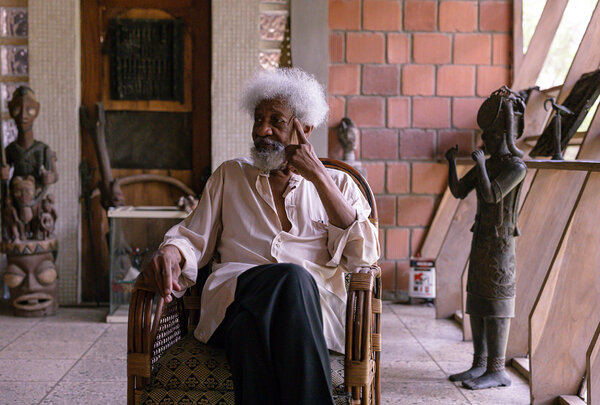 Like the time he held up a radio station to keep it from broadcasting what he said were fake election results, and got jailed for it. Or when he sneaked into Biafra at the height of its war for independence from Nigeria, and spent two years in solitary confinement after calling for an end to the fighting.

When the first Black winner of the Nobel Prize in Literature — and its first African winner — senses that things like freedom and democracy are under threat in the beloved nation whose history has intertwined with his own, he can’t help it. He has to get involved.

“It’s a temperament,” Soyinka, 87, said during an interview in Abeokuta, his hometown in southern Nigeria.

He calls this brick house, surrounded by forest and birdsong, his sanctuary. His voice, a deep, distinguished lilt, evokes the hypnotic plays for which he is best known, one moment solemn, the next lighthearted. His shirt, unbuttoned almost to the waist, hints at his reputation as a rebel, the one who tore up his U.S. green card after Donald Trump became president, the one who calls his own country’s president “the Rip Van Winkle of Nigerian history” and Uganda’s a “shameless geriatric.”

He pokes fun at himself for this temperament, this urge to speak his mind.

“Unfortunately, some of us are not very wise. We know what we ought to do, when we should retire, go and hide out somewhere, live a life of ease,” he said, smiling, as we sat in cane armchairs in an elevated, open gallery. “But we don’t take our own advice, do we? It’s a mystery to me.”

Last year, thinking he needed a change from a long spell being “locked down, and locked at my desk,” he almost directed his 1975 play “Death and the King’s Horseman” in Lagos, only realizing after a few readings that he didn’t want to do it.

Directed instead by his friend, the Nigerian movie and theater director Bolanle Austen-Peters, the play, with its tale of a king’s chief who must die when his master does, felt like a gift amid the dearth of theater and performances during the pandemic. Decades after he wrote it, the Lagos audience, on the May evening I attended, cheered and cried their way through a work ringing with Soyinka’s voice, somehow both forbidding and delicate. He “fashions the drama of existence,” the Nobel committee wrote in 1986.

Sometimes the firebrand temperament distracts from the writing. To his longtime editor, Erroll McDonald, however, they coexist. “They feed off each other,” he said. “It is impossible to think of one without the other.” And Soyinka the activist does seem to keep providing Soyinka the writer with material.

Your Guide to Fall Reading

Whether you want biographies, novels or essay collections, we can help you find your next book to read. Here are 57 titles to get you started.