The Today Show stars such as Savannah Guthrie and Al Roker have been known to speak candidly about their home lives, including sharing rare details about their engagements.

And have you spotted Jenna Bush Hager and Dylan Dreyer’s show-stopping engagement rings? From sentimental diamond rocks to close-call break-ups and surprise sunset proposals, take a peek inside the TV stars’ love lives…

Hoda Kotb‘s ex-fiancé Joel Schiffman worked with a jewellery designer for months to create her diamond and sapphire ring, which has an estimated value of over $250,000.

“I just assumed if it ever were to happen that he would have gone to a store and bought one. It’s beautiful,” she said, adding: “He put it on, and I was blown away by his choice, but I have to tell you I know so little about rings. I just don’t.”

Hoda continued: “The diamond part is square and around it, it looks like a stop sign. And it’s blue on the edge. Sapphires? I don’t know. But I love it.” The former couple split in January 2022.

The Natural Sapphire Company reported that her ring boasts Harry’s great-grandmother’s diamond, adding: “The setting is very reminiscent of the 1920s and has round brilliant cut diamonds pave set on the shank.”

However, Jenna previously admitted on a Today show episode that she had in fact asked Henry to marry her a few years prior to their engagement. At the time Henry said it was too soon, but of course, the rest is history.

Dylan Dreyer has rarely been pictured without her engagement ring since marrying Brian Fichera in 2012.

The TV star sports a square-shaped diamond on a pave band next to a matching diamond-studded wedding ring. However, she recently revealed she takes them both off to sleep at night – and it led to her briefly losing her engagement ring.

“I have no idea where it is, I shook out the trash, I shook out the laundry, I called Brian and he’s looking all over for it. We’re about to call maintenance in our building to, you know, it’s got to be down the drain,” she recalled to her Today co-stars, before revealing it was hidden in the pocket inside her yoga pants.

Al Roker planned his proposal to his wife Deborah Roberts a year in advance since he wanted to surprise her with a Grand Canyon engagement. But he said Deborah was beginning to get impatient, especially since his sister was encouraging Deborah to give Al an ultimatum.

Deborah admitted she was “not happy” on New Year’s Day and began asking when she could expect to get a ring. “Oh, no later than Ground Hog Day!” Al joked on The Rachael Show.

However, they both thought the other person was planning to break up with them before Al drove them from Phoenix to the Grand Canyon on New Year’s Day and proposed. “I dropped to my knee and I started babbling,” Al said, and his wife added: “I thought he fell!” before saying it was “beautiful” and it made her cry. How sweet! 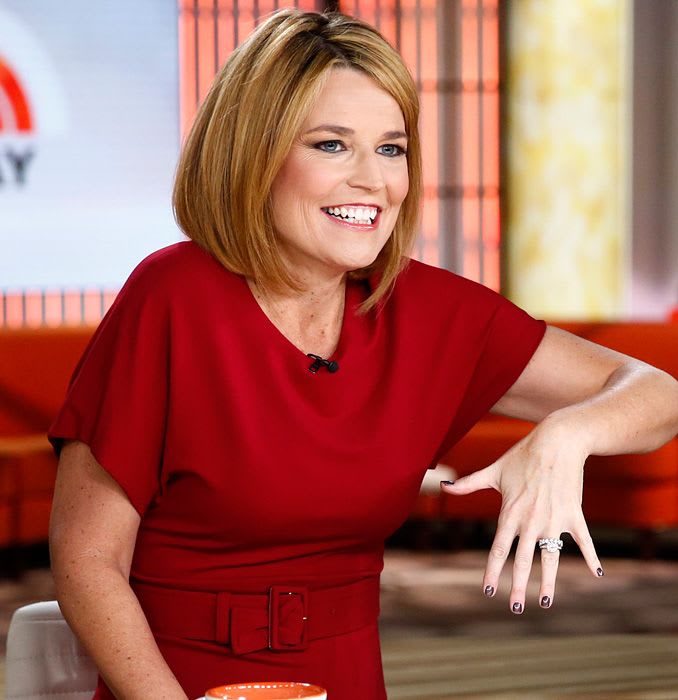 One morning on the trip, Savannah said to Michael, “I love you so much, but if we can’t decide, then I think we’ve decided”. Just hours later, he popped the question over a bottle of champagne at sunset and Savannah joked she “thought about it for about 0.2 seconds.” We wouldn’t hesitate if we were given that ring either!

Carson Daly proposed to his longtime girlfriend and food blogger Siri Pinter in 2013, and the engagement rumours began to circulate after she was spotted wearing a diamond on a platinum band.

They got married in a secret ceremony on Christmas Eve in 2015.