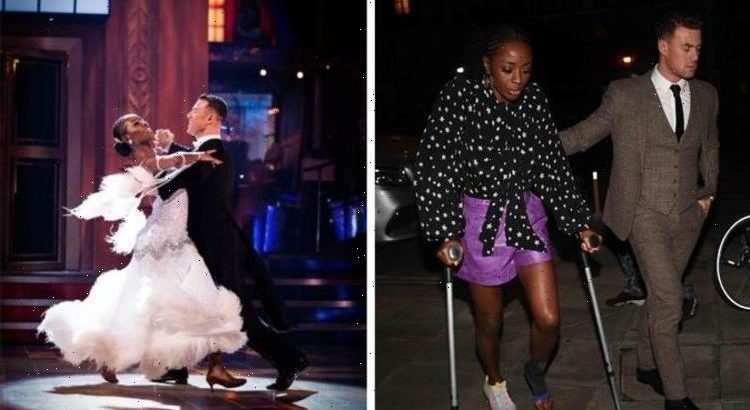 Strictly: AJ Odudu breaks down over her injury before the final

For obvious reasons, devastated dance star AJ Odudu has described the mishap as “the worst possible timing”. With Saturday’s final on the horizon, it had initially seemed as though 33-year-old AJ’s dreams might be dashed.

The presenter was forced to miss a day of training to get a scan at the hospital.

She was also recently pictured braving the cold with her injured foot exposed to the winter elements.

Flanked by a supportive Kai Widdrington, she had just clambered out of a car in snaps that were taken.

With a visibly pained expression on her face, the wincing Strictly star clutched onto Kai’s arm for support as the pair prepared to enter Riverside Studios.

It is believed that AJ had been advised to avoid putting too much pressure on her ankle or foot, which was shown wrapped inside a support band, but Kai attempted to boost her mood.

In spite of her agony, AJ was uncompromising about displaying her sense of style, sporting neon lilac shorts teamed with a black star print blouse and a sash at the waist.

Meanwhile a show insider has claimed that, with luck, she will be fit to participate in the final.

If so, she will be joining same sex couple John Whaite and Johannes Rabede, plus Rose Ayling-Ellis and Giovanni Pernice in the competition for the winners’ title.

A source has revealed to The Mirror: “AJ is a real trooper and will keep going no matter what.

The insider also acknowledged: “The pain in her foot was terrible.”

A gruelling training schedule had left AJ exhausted, while a scare of being booted out after a failed dance move blighted one of her performances with partner Kai.

However, the pair, whose chemistry has been noticed by viewers, quickly recovered from the mishap to reach joint top of the leaderboard for the semi-final.

AJ’s Quickstep and Rumba moves delighted audiences and, if her injury heals in enough time, the Strictly Glitterball trophy may still be within her reach.

That is in spite of a spokesperson at BetVictor suggesting that Rose is “still the front runner in the competition”.

Yesterday, AJ reposted an illustration of her and Kai dancing, with the caption: “Seeing that support is really moving and it’s just given me the extra boost now to go out and smash it.”

While the ligaments in her foot heal, she will no doubt be seeking solace in the encouraging Instagram comments left by some of the star’s 195,000 followers.

One of her photos from the semi-final, labelled “Quickstep gives you wings”, received a generous response.

Kevin Clifton, who is well known for his podcast discussing the ins and outs of the show, wrote: “This was an amazing dance”, punctuating his thoughts with clapping emojis.

Fairylights_25 added: “You did look like you were flying round that dancefloor!!!

“It was just mesmerising to watch as was that Rumba!!! Loved both dances so so so so much!!”

Meanwhile x_victoriaburn_x promised: “You’ll have all my votes, just like you have all series.”