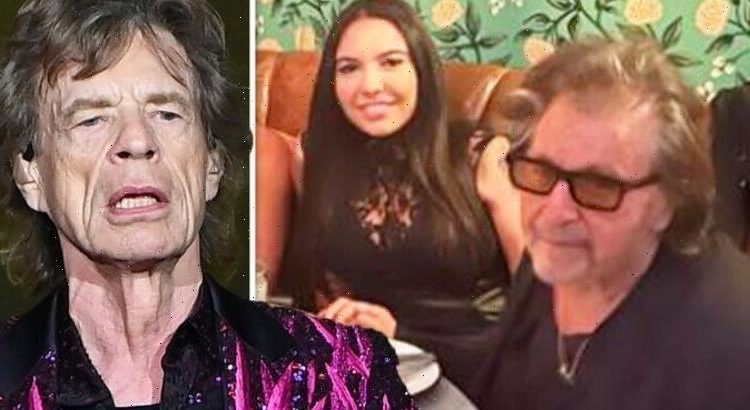 The One Show: Al Pacino gets up to leave programme early

Hollywood director Al Pacino reportedly began dating Mick Jagger’s ex-girlfriend, Noor Alfallah, during the pandemic and according to an insider are said to be “getting on very well” despite their 53-year age gap.. It comes after the duo were snapped leaving a glamorous Los Angeles restaurant last week. Now, a source has claimed their relationship is reported to have blossomed years after the Rolling Stones frontman and Noor’s split in 2017.

The age gap doesn’t seem to be a problem, even though he is older than her father

But it has been reported that he’s currently dating the former flame of Rolling Stones star, Mick.

Hollywood legend Al was recently spotted cosying up to Noor during a dinner party with Dune actor, Jason Momoa, which the latter shared in a snap with his 16 million Instagram followers.

A source has now claimed that Noor and The Godfather star first started seeing each other romantically during the pandemic.

They added that the 53-year age gap isn’t a problem for the duo.

The source claimed: “[Noor] mostly dates very rich older men; she was with Mick Jagger for a while, and then she dated Nicholas Berggruen.

“She has been with Al for some time and they get on very well.

They went on: “The age gap doesn’t seem to be a problem, even though he is older than her father.

The source added to Page Six that Noor comes from a family “with money”.

It comes after the director was spotted leaving Felix Trattoria in Venice Beach, California with Noor last Saturday.

The 28-year-old is vice president of Lynda Obst Productions at Sony.

Noor has previously addressed her past relationship with Rolling Stones frontman Mick, branding it a “happy time”.

She said: “Our ages didn’t matter to me.

“The heart doesn’t know what it sees, it only knows what it feels.

“It was my first serious relationship, but it was a happy time for me,” she said to HELLO! Magazine.

Mick has since moved on and started dating choreographer and former ballerina Melanie Hamrick, 35.

The musician and Melanie share son Deveraux Octavian Basil Jagger, who was born in 2016.

Melanie made a public appearance on Thursday as she stepped out with Mick’s daughter, Jade, 50.

The pair attended an event hosted by an aesthetics doctor and skincare entrepreneur Barbara Sturm in London.