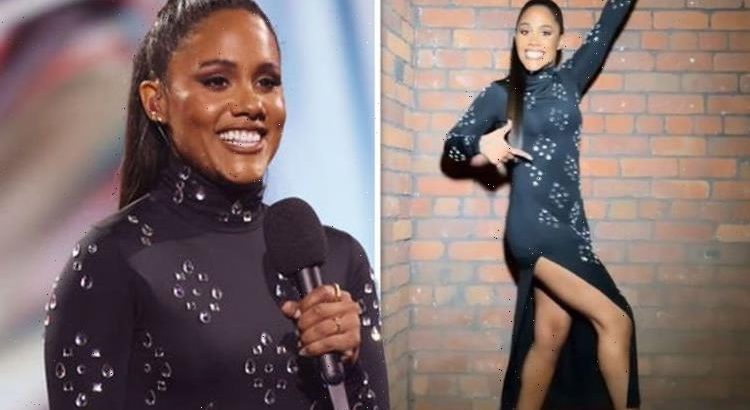 Alex Scott turned heads tonight as she hosted the UEFA Women’s EURO 2022 Final Draw Ceremony at Manchester’s O2 Victoria Warehouse, alongside Gabby Logan. The sports pundit’s appearance comes days after she was absent from The One Show.

The 37-year-old was said to have fallen ill and could not present Monday’s episode.

“Hello and welcome to your first One Show of the week,” Jermaine began after the show’s opening credits.

He continued: “Live on BBC One and iPlayer with me – yes, just me.

“Alex Scott should be with me but unfortunately she’s been hit, like so many, with that dreaded super cold.”

He added: “So get well soon. We can’t wait to have you back.”

Alex remained absent from The One Show sofa for the rest of the week, with the likes of Oti Mabuse and Michelle Ackerley stepping in.

However, Alex appeared to be in high spirits as she fronted the women’s Euro 2022 draw following her illness.

She stunned in a floor-length dress that featured a thigh-high split giving a glimpse of her long legs.

She paired the daring number with a pair of black heels, adding height to her look.

The TV presenter styled her dark tresses into half-up and half-down hairdo.

Alex opted for dramatic makeup as she accentuated her natural looks with a smokey-eye palette and bronzed cheekbones.

She accessorised her glamorous ensemble with an array of gold rings and stud earrings, while she gave a flash of her rosary beads tattoo underneath her left sleeve.

The One Show presenter was joined by her co-host Gabby, 48, at the sporting event.

Gabby looked chic in a simple black dress and wore her blonde tresses in loose waves.