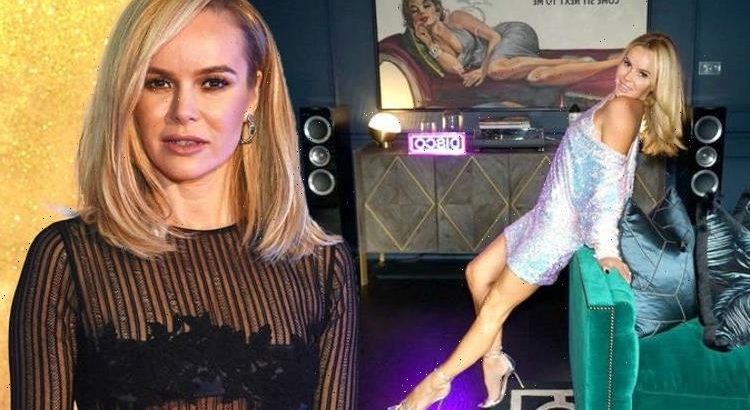 Amanda Holden stuns in a brown outfit for her radio show

Musical theatre star Amanda Holden, 50, was praised for her “stunning” figure by fans, who rushed to compliment her on her latest post. The actress was pictured in a sparkly off-the-shoulder dress and a pair of matching silver stiletto heels.

In the picture, the Britain’s Got Talent judge showed off her enviable silhouette in front of a retro disco interior.

Amanda could be seen leaning against a luxurious green velvet sofa and posing on a purple carpet floor with a poster of a sultry woman lounging and smoking a cigarette behind her.

There also appeared to be a music system in the room with speakers and a neon pink Disco sign on it, as well as an electric guitar standing against the wall.

“Saturday Night Disco in the Holden house,” the star wrote in the caption with a dancing emoji.

Amanda’s 1.8 million Instagram followers were quick to flood the comments section with praise and compliments over the singer’s glamorous look.

Several followers called her “stunning” and “gorgeous” with plenty of flame and love heart emojis.

“Do you ever NOT look fabulous,” added user @true_brits_voice.

The star’s fan page @amandaholden.f, which has 17,700 followers wrote: “Ooohh love a disco night! You look stunning in that dress.”

Mother-of-four Shelley Luscombe sweetly added: “My 7 year old has just looked over my shoulder at this pic and said mammy I’d party every night if I had that disco in my house.”

The star was previously married to comedian Les Dennis between 1995 and 2003.

On the show, Jemma’s character Harlow will visit her family in Britain to uncover the mystery of her late mother, Prue, who was played by Denise Van Outen.

Amanda said of her new role: “If I’d told my 12/13 year-old self I would one day appear in Neighbours I’d have never believed it!

“To now have the opportunity to be a part of such an iconic Australian show is simply fabulous,” she added.

The star has also been rumoured to make a possible return to This Morning after Eamonn Holmes announced his shock exit from the show.

There has also been talk of his wife Ruth Langsford, who has a long history with the show, stepping down.

Amanda stepped in to host the ITV show back in 2015 when Holly Willoughby went on maternity leave, presenting alongside Phillip Schofield.

The last time Amanda was in the running to co-host beside Phillip was in 2018 when Holly filled in for Ant McPartlin on I’m A Celebrity… Get Me Out of Here!, but the gig ended up going to The Saturdays singer Rochelle Humes.