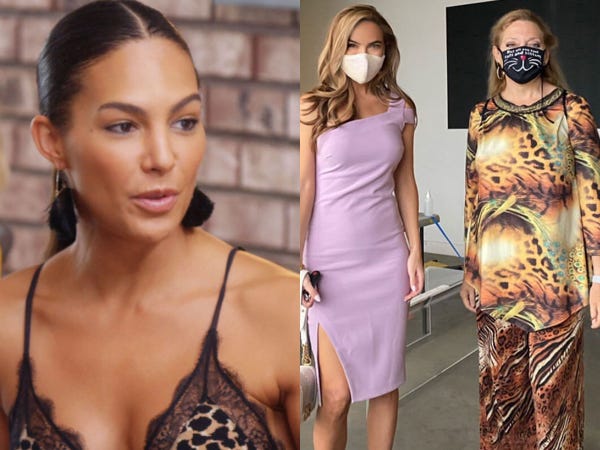 Season 29 of ABC's "Dancing With the Stars" will feature a face-off between two Netflix reality stars: Chrishell Stause of "Selling Sunset" and Carole Baskin of "Tiger King."

Stause's costar, Amanza Smith, weighed in on the competition during a recent phone interview with Insider.

"If she can't beat Carole Baskin, we've got problems," Smith, who used to be a dance teacher and an NFL cheerleader for the Indianapolis Colts, joked.

"I can't imagine that she's got a ton of rhythm," Smith said, referring to the 59-year-old CEO of Big Cat Rescue. "I just can't imagine."

Both Stause and Baskin have already started rehearsals ahead of the show's premiere next week.

On Tuesday, Stause shared a photo of herself standing next to Baskin, who was covered in animal print, on her Instagram story.

Smith told Insider that she has faith in Stause, calling her costar "amazing" and pointing out how much she's been through in recent years.

Toward the end of season three of "Selling Sunset," viewers learned that Stause's husband of two years, Justin Hartley, texted her to notify her that he filed for divorce, bringing their six-year relationship to an abrupt close. He's since moved on with actress Sofia Pernas.

"This woman has had just blow after blow," Smith said, citing not only to Stause's divorce but also the death of both her parents a little over a year apart.

"She's really had a lot of tough trauma over the past few years. This year, even on the heels of her divorce, she was nominated for an Emmy. She's going to do 'Dancing With the Stars.' She's selling real estate. She's beautiful. She's going to be just fine," Smith told Insider.

I can’t put into words how much fun I am having/how much I am pushing myself to do something I never thought I could! Life is short-Say YES even if it terrifies you! I hope you guys vote for me on Sept 14th bc I want to be around to play in the sequins & glitter for a long time hopefully 🤞🏼🤞🏼💃🏻😆💎 @dancingabc #DWTS

As for Stause, the real estate agent is ready to leave the past behind her.

"I'm hoping this will be a new chapter, something positive, an experience I can kinda throw myself into and just kind of learn a new skill and have fun at the same time. I have no dance experience, so it's going to at least be a laugh for all of us," she told Entertainment Tonight.

Stause added, "I want to be in a place where everybody just moves on. I'm excited to move past that chapter and onto the next."

Season 29 of "Dancing With the Stars" will premiere Monday, September 14 at 8 p.m. EST on ABC.