AceShowbiz –
Carrie Underwood showed her pregnancy glow at the 2018 American Music Awards. The expectant singer, who is billed as one of musical performers at the Tuesday, October 9 show, flaunted her baby bump on the red carpet at the Microsoft Theater in Downtown Los Angeles, California.

The 35-year-old rocked a figure hugging black dress with gold accents. She showed some skin with the plunging neckline and a thigh-high slit, and completed her look with pointed toe heels, dangling earrings and a huge diamond ring. She cradled her baby bump while posing for photographers. 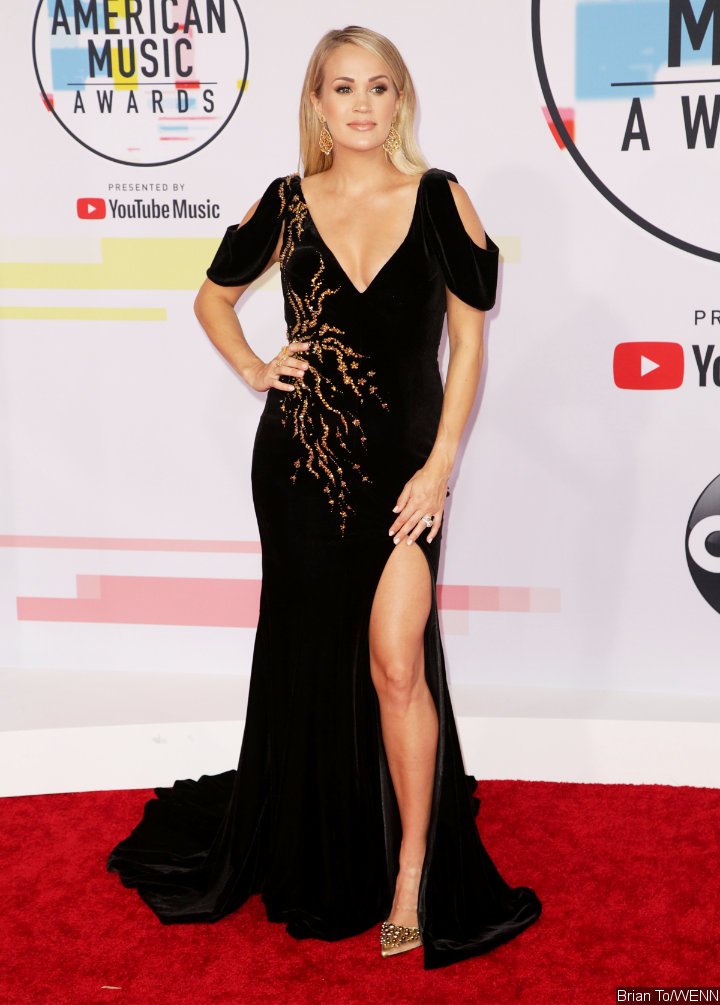 Carrie is set to perform “Spinning Bottles” off her latest album “Cry Pretty”. On Monday, she shared a picture from rehearsal for the 46th annual prize-giving event. The 35-year-old country/pop star kept it casual and comfortable in denim shirt and jeans, while her long blonde locks were arranged in a high bun.

Rehearsing for the @AMAs. Tune in LIVE at 8/7c on Tuesday on @ABCnetwork. #SpinningBottles #AMAs ?: Kevin Winter/@GettyEntertainment

Carrie is currently expecting her second child with husband Mike Fisher. They confirmed the pregnancy reports in August, months after she had a freak accident that required her to get 40 to 50 stitches in her face and surgery on her broken wrist.

The “American Idol” alum then stayed out of the spotlight while she recovered from her injuries, but recently she got the courage to show the scar on her face. Sharing a throwback photo from the filming of “Love Wins” music video, she wrote along with it, “FBF (Flashback Friday) to filming the Love Wins music video!”

Carrie is reportedly due to give birth around January or February 2019. She and her former NFL player husband are already parents to 3-year-old son Isaiah Michael Fisher.