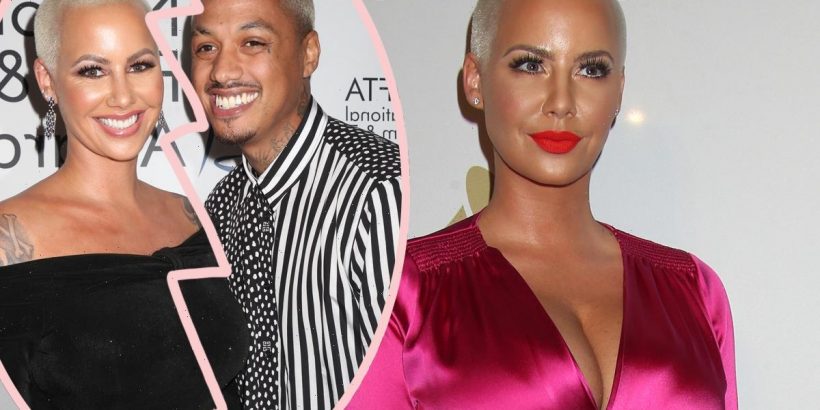 We feel so bad for Amber Rose!

The Slutwalk founder is known both for speaking her mind and for not taking any s**t from anyone, and she very much proved why on Wednesday. She dumped her boyfriend via Instagram in one of the most brutal, honest things we’ve ever seen on social media!

Taking to her Stories, the model posted a lengthy rant accusing Alexander “A.E.” Edwards of cheating with at least 12 women “that I know of” — leading her to break things off right then and there! She wrote:

“I’m tired of getting cheated on and being embarrassed behind the scenes. All 12 of y’all bums (The ones that I know of there’s probably more) can have him. Y’all very much knew he was in a relationship with a baby and y’all decided to f**k him anyway.”

Damn! Muvah added that she already has all the evidence so there’s no point in denying it:

“I saw all the texts and DM’s. Y’all were well aware but y’all don’t owe me any loyalty so it’s whatever. I can’t be the only one fighting for my family anymore. I’ve been so loyal and transparent but I haven’t gotten the same energy in return. I’ll never say the girl’s names because I’m not in the business of ruining people’s lives but y’all know who y’all are.”

They surely do! And apparently they could care less about hurting Amber!

And clearly that part didn’t bother A.E. all that much either! She made things definitive as she closed out the post with:

“As for him…the lack of loyalty and the disrespect is ridiculous and I’m done. – Muva” 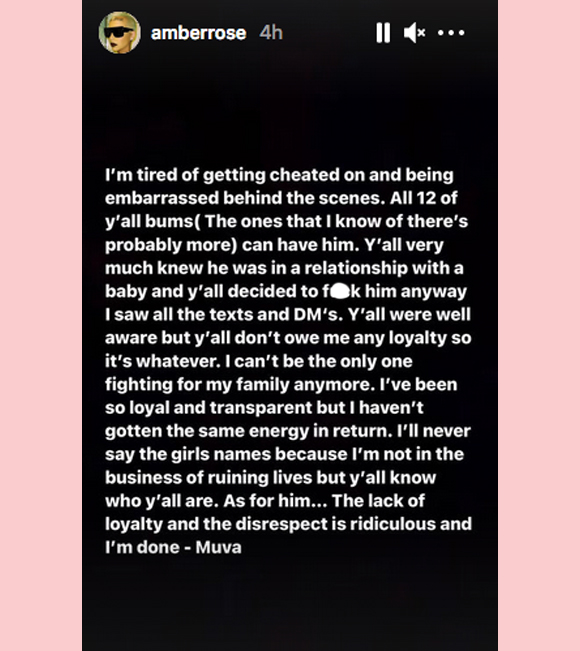 We’re obviously so heartbroken for Amber that this happened to her. But we are also, as ever, blown away by this woman’s strength and sense of self-worth in the face of mistreatment. We hope other women out there getting routinely cheated on follow her lead!

Amber and A.E. had been together since 2018 and share one son together, Slash Electric, who was born in October 2019.

Innerestingly, it seems Muva’s momma didn’t share her opinion that this was the right course of action in the face of the music exec’s betrayal. Because just minutes later she posted:

“My raging narcissistic mom can get the f**k out of my life too. On my kids”

The 37-year-old OnlyFans entertainer added — apparently referencing both A.E. and her mother:

“I’m tired of being mentally and emotionally abused by people that I love. I’ve been suffering in silence for a long time and I can’t take it anymore. That’s why I’ve been so quiet. I’ve been a shell of who I used to be but I refuse to let anyone damage me anymore. Family or not.”

We hope this means we’ll hear more from Amber on social media soon.

What do YOU think about her dumping her man on IG? Have you ever broken up with someone in public?? Let us know in the comments (below)!