Oy with the poodles! Amy Sherman-Palladino and Dan Palladino took fans to Stars Hollow during Sunday night’s live virtual Emmy Awards. Both were nominated this year for Outstanding Directing for a Comedy Series for their respective work on The Marvelous Mrs. Maisel. But it was fans of the couple’s other hit show, Gilmore Girls, who got excited online after catching a glimpse into the couple’s home.

Before the winner was announced, host Jimmy Kimmel joked, “The key match-up to watch here is Amy Sherman-Palladino versus her husband, Dan. Will a marriage crumble before our eyes?”

The camera then cut to the Palladinos, who were seated together in front of their mantle at home amid the virtual show. While many focused on the fact that Sherman-Palladino outdid herself in the hat department, many others noticed the massive Dragonfly Inn sign hanging above the couple’s fireplace. 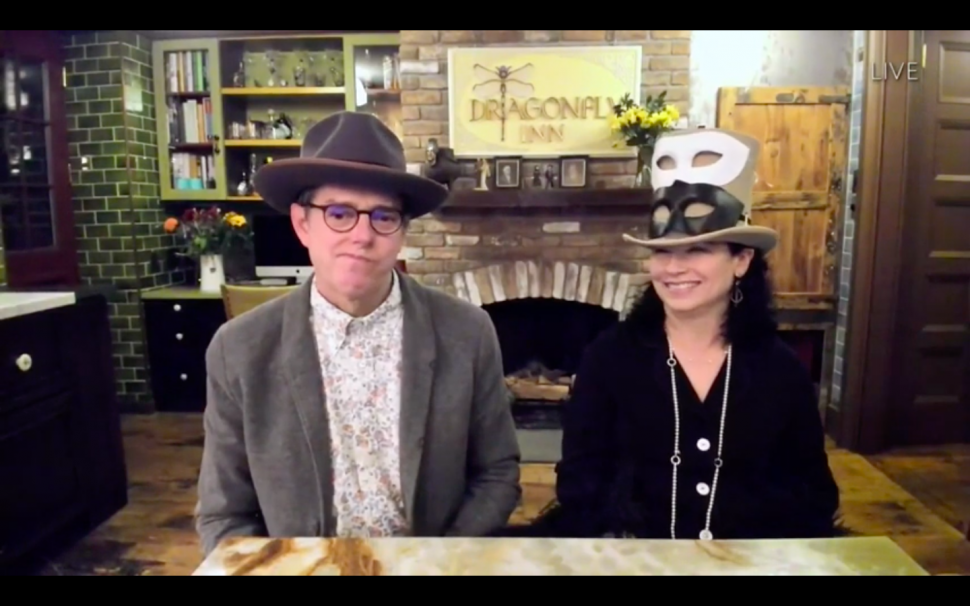 Of course, the Dragonfly Inn was featured in Gilmore Girls as the inn renovated and reopened by Lorelai Gilmore (Lauren Graham) and Sookie St. James (Melissa McCarthy) in season 4 of the show. It served as the setting for many of the show’s famous scenes through season 7 and into the show’s Netflix reboot, A Year in the Life.

Amy Sherman-Palladino has the sign from the Dragonfly Inn an over her mantle. My heart. 💜

i’m so sorry literally no one cares about this but amy sherman-palladino is live-streaming into the emmys from her house and she has a dragonfly inn sing behind her :’)

Amy Sherman-Palladino is sitting in front of the Dragonfly Inn 🥰

OMG AMY SHERMAN-PALLADINO AND DAN PALLADINO ARE AT THE DRAGONFLY!!!!!!!!!!!!!! #Emmyspic.twitter.com/yiYpea7Hvp

Am I the only one who noticed the Dragonfly Inn sign above Amy Sherman-Palladino's fireplace?!!!!#Emmys#GilmoreGirls

I can’t be the only #GilmoreGirls fan watching the #Emmys2020 who noticed Amy Sherman Palladino and Daniel Palladino sitting at the Dragonfly Inn. Pleaseee let this be them trying to tell us something 😬😬🙏🏻🙏🏻

the fact that Amy Sherman Palladino has a dragonfly inn sign hanging over her fire place🥺😭 #GilmoreGirls#Emmyspic.twitter.com/blt5Ar5OjD

Neither of the Palladinos took home the directing Emmy, but they both won for Outstanding Music Supervision on The Marvelous Mrs. Maisel.

For more from this year’s Emmys, watch the clip below: