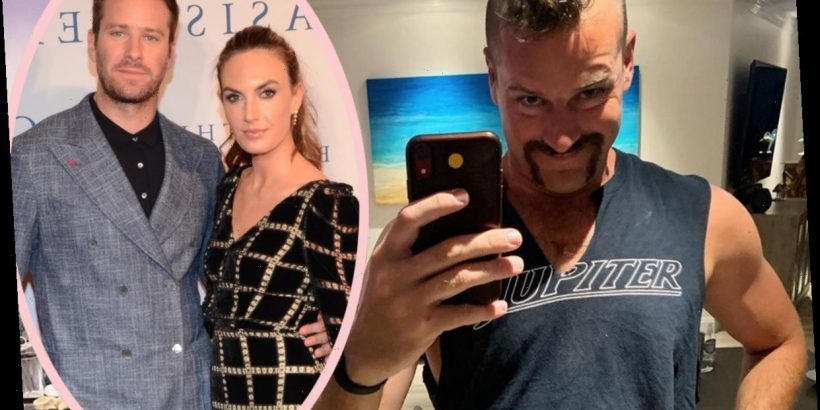 We really feel like we’ve had no idea who Armie Hammer was this whole time. And apparently neither did his wife!

In case you missed it, social media was flooded over the weekend with horrific DMs allegedly sent by the Call Me By Your Name star to various women. If real, the messages make Armie a cheater at best — and a possible rapist with an interest in cannibalism at worst. Yes, really.

The messages date back from 2016 up to February of last year — a time period in which he had been married to Elizabeth Chambers for several years. If the DMs are genuine, they not only contain specific plans to meet up so he could cheat on the mother of his children, they also reveal some seriously sadistic bedroom proclivities.

“Would you come and be my property till you die? If I wanted to cut off one of your toes and keep it with me in my pocket so I always had a piece of you in my possession?”

Morbid, but no one would take it literally, right? Except, one of the most eye-catching statements was telling a woman:

That at least seems pretty metaphorical — at least to a normal person — but then the user purported to be Armie brought up drinking this woman’s blood enough times while planning a rendezvous that it really started to bother her, writing:

“I need to drink your blood… I need your blood. I crave it. Will you give it to me tomorrow?”

“That topic… once again? It is very intense.”

To which he allegedly replied:

“I’m intense! I need your blood. I want you to feed me with it.”

The worst message seemed to include the 34-year-old admitting to assaulting one of his “pets” or “kittens” as he called them:

“R*ping you on your floor with a knife against you. Everything else seemed boring. You crying and screaming, me standing over you. I felt like a god. I’ve never felt such power and intensity.”

Again, these DMs are not confirmed to have come from Armie’s account — though we don’t see any doctoring in the screenshots shared anonymously, mostly by the Instagram account House of Effie. Also the photos he allegedly sent seem legit, too, right down to the finger tattoo. And we heard there are even audio messages? The movie star has a pretty distinctive voice after all… It’s a lot of evidence.

You know who believes it’s all real? The person who knows him best — or at least thought she did!

According to a friend speaking to DailyMail.com, Elizabeth was all too aware of Armie’s infidelities by the end — including the heavily rumored tryst with Rebecca co-star Lily James. And while she was said to be in “complete shock” after reading about the kinks, the insider says she believes these women. The source claims:

“A lot of these women have reached out to Elizabeth and although she didn’t want to admit it to herself at first, she knows now they are speaking the truth. Armie had a whole other side to him that she wasn’t aware of. Whether it was always there and he kept it hidden, or something happened that changed him completely, she doesn’t know.”

If it is all real, and his estranged wife believes it, “Armie appears to be a monster.” One of the women allegedly told Elizabeth she’d gone to “intense rehab and therapy program because of his emotional and maybe physical abuse”:

“He preyed upon her when she was coming out of a relationship. He made her feel very uncomfortable, the things he wanted to do made her very scared.”

If it’s anything like those messages, we’d be scared, too. He’s a big, potentially scary guy in person.

The woman who runs the now-private House Of Effie account explained she hadn’t planned to publicize her affair with Armie — but that she’d been contacted by others and were able to “piece together a five year timeline” of his abuse:

“Women approached me with their affair stories as we talked overwhelmed with grief for days and nights without sleeping or eating, with some ending up in the ER. We collectively decided we have to speak out after how we were treated and seeing how the women in 2020 were being treated by him. We cannot allow more women to endure what we are going through in the future.”

What they allegedly went through was a pattern of abuse in which it’s claimed the Lone Ranger star would abuse one woman until she was too upset for him to continue — then move on to the next:

“When has a fight with his wife, he’d reach out to his kitten, and when they had a fight, the next day he would just reach out to his other kitten with the same message. Naturally all fights revolving around bad treatment of women.”

Chambers’ alleged confidant said she believes her ex could be the monster these women describe, telling DM:

“Elizabeth is very concerned about his pattern of preying on young vulnerable women. A pattern that must be stopped.”

We have no idea if the affair with Lily James was part of this alleged pattern btw. She’s 31 years old and was the co-lead in his movie — not exactly much younger and more vulnerable. But now that Elizabeth is reportedly listening to the women who are speaking out, she should at least be able to keep herself and her children safe.

Do YOU believe all this, Perezcious readers? Did the screenshots and photos convince you??