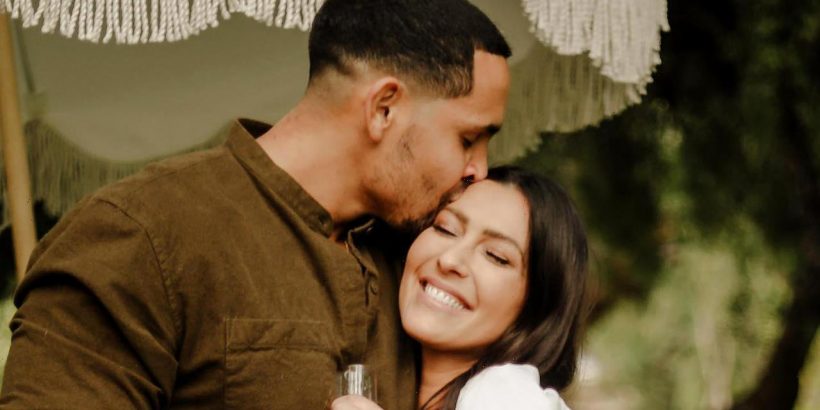 Thomas himself also defends the untraditional proposal, saying in an episode of Becca’s ‘Bachelor Happy Hour’ podcast that he feels ‘very fortunate to have been able to experience that.’

AceShowbiz –Becca Kufrin has shut down naysayers commenting on her engagement to Thomas Jacobs. Having been dubbed “desperate” by online users for proposing to her boyfriend, the season 14 star of “The Bachelorette” fired back to the critics.

The 32-year-old offered her clapback when hosting the Tuesday, June 7 episode of her “Bachelor Happy Hour” podcast. “We’ve received so much love from people, but I’ve also seen comments where people are like, ‘She’s desperate,’ ” she first said.

“But why does it, as a female, make me desperate to want to [propose] to somebody? If Thomas in a week were to do the exact same thing, no one says he’s desperate. It doesn’t make sense to me,” the reality star argued. “The logic’s not there.”

Becca went on to explain that she decided to be the one who popped the question because she “knew that he would be so appreciative and supportive of it.” She added, “He would never be offended if the female proposed to the man. So, it’s like, why should that matter who does it? … F**k the gender norms!”

Thomas himself wasn’t bothered with the untraditional proposal, saying that he felt “very fortunate to have been able to experience that… I’m even more fortunate that it’s with [Becca].” The 29-year-old, who made a guest appearance on the podcast, then gushed, “And I’m just excited for this life, you know?”

Becca and Thomas, who met on “Bachelor in Paradise” season 7, announced their engagement on May 29. Sharing a series of pictures from the romantic proposal, the TV personality first declared, “In the ultimate plot twist…HE SAID YES!”

“We’ve been keeping this secret just between us and close family & friends for a while but we’re so excited to shout it from the rooftops! I finally found my chauffeur for life and the one who makes my heart smile every single day,” she continued. “I can’t wait to do it all with you Tommy, thanks for making me the happiest gal alive. I love you to the moon & back.”

Thomas, for his part, posted similar pictures on his own Instagram page. Alongside the snaps, he wrote, “The ultimate UNO reverse card / power move. You keeping me on my toes for a lifetime has a great ring to it. Cheers to forever Boops #Fiance.”