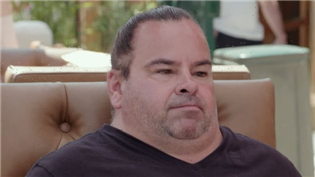 90 Day Fiance fans are all too aware that Big Ed Brown is a narcissistic creep.

But when Ed first appeared on TV and memes everywhere, a woman warned that he was a sexual predator.

Now, another woman has come forward to accuse Ed

The Tell All episode had scarcely begun when Big Ed came face-to-face with Fernanda Flores.

Supposedly in love with Liz and hoping to work past their “rough patch,” he babbled compliments at Fernanda.

Despite being twice her age, he was practically drooling over the 23-year-old model.

But this is hardly the first time that Big Ed has grossed out viewers with his lecherous horndog attitude.

His girlfreind, Liz, isn’t exactly geriatric herself — she’s in her late twenties.

And the world came to know Ed in the first place when he was dating another super young single mom, Rosemarie Vega.

But as detestable as the 56-year-old’s apparent feelings of entitlement to young, beautiful women may be … it gets worse.

In early 2020, a woman named Lorelei Clemens took to TikTok to share her experiences with Big Ed.

She was tired of seeing lighthearted memes made about the man who allegedly sexually abused her.

Lorelei described Big Ed as having groomed her gradually over time.

Eventually, she reported, this escalated to sexual harassment and abuse.

At least one time, she claimed, he put something into her drink — but she could not say more du eot an NDA.

According to her, Big Ed was once a customer … and the situation was a nightmare.

According to her story, she danced for Big Ed for $100.

She alleged that he kept trying to shove his face into her crotch to perform a sex act on her.

She described this as happening for “90%” of the time.

As a result, she had to defend herself, allegedly shoving him back and having to “choke that tiny ass neck.”

It was also reported that Ed asked her to be his sugar baby.

Let’s be clear, while offering the bare minimum of a tip is sleazy, the issue here is sexual assault.

You do not get to put your mouth on someone without their permission.

This goes extra for someone’s genitals. What was described is sexual assault.

Some have expressed hope that yet another public accusation of sexual assault against Big Ed will do what the first did not.

Perhaps TLC will stop putting him on people’s screens, finally.

Unfortunately, that might not be the case … at least, not unless there are more stories out there about him.

First of all, if one woman’s callout didn’t work last year, an indirect follow-up seems likely to fail.

Keep in mind how much stigma is associated with sex workers of all types, including strippers.

Some truly vile people might say that, by virtue of her profession, this woman was “asking” to be assaulted, somehow.

Meanwhile, TLC continues to employ Big Ed because he makes them money.

Whether it’s on the show or on the Discovery Plus app, Ed draws in viewers.

People find him entertaining because he is an absurd caricature of a real person.

Too many are willing to overlook his disgusting behavior because he makes them laugh.

The network does it because he makes them money.

Only massive fan outcry, like the campaigns against Geoffrey Paschel and Lisa Hamme, are enough to get advertiser attention and make TLC listen.