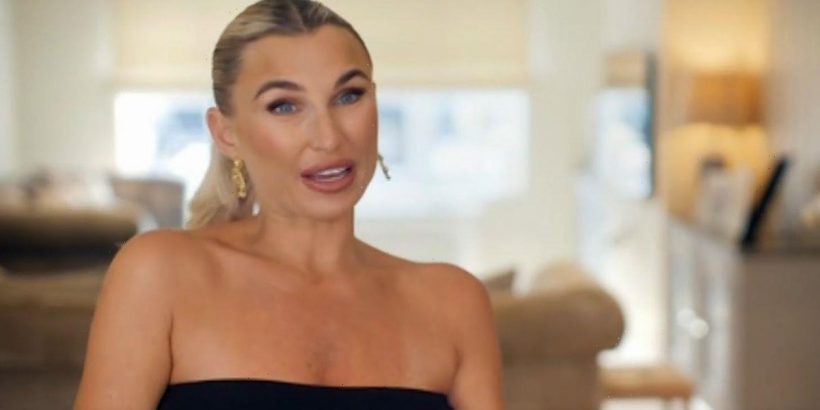 Former The Only Way Is Essex star Billie Shepherd has spoken of her hopes for a home birth after sister Sam Faiers gave birth in her kitchen this summer.

Speaking on her show Billie and Greg: Family Diaries she says: "After seeing my sister and how amazing it was, it's really encouraged me to try and have a home birth."

The star continued: "I also think because this could be my last baby so it would be really nice to experience it."

Sister Sam Faiers appearing via a link says: "You could definitely 100 per cent do it, in your new home and then I could be there because if you have a hospital birth I won't be able to be there."

Sam, 31, adds: "The question is will there be any more because I keep getting asked now."

Billie, 32, replies: "Three will be a nice number for me." And Sam says: "Maybe I would have a fourth but I just don't know."

Billie and Greg Shepherd are slowly turning the house they purchased in 2020 into a home as they lovingly renovate their £1.4million Essex mansion.

The pair have been taking fans along with them as they continue their home project and even have a dedicated social media account for all things home renovation related.

The reality star announced her pregnancy this summer on Instagram when she wrote: "Baby number 3 we can’t wait to meet you … We are so happy and excited."

She told OK! about the moment she found out she was pregnant saying: “My boobs were swollen, I felt a bit sicky, and I remember being at a party at my friend’s house and I had a sip of prosecco and just didn’t fancy it. So, we bought a pregnancy test while we were out shopping, and I laughed with Greg about hoping that no one saw us buying it!”

The star, who is also mum to daughter Nelly, eight, and five year old son Arthur, recalled the evening she took the test saying: “After we put the kids to bed, I took the test in the bathroom and jumped back into bed with Greg – and you know when it just keeps flashing?

“I was really nervous because a positive pregnancy test is life changing. It’s quite overwhelming. So, it was doing that flashing, flashing, flashing for ages then it popped up ‘pregnant’ and was 3 weeks+. We were like, ‘Oh my god!’ We were so excited.” Sam and her former property developer boyfriend, Paul Knightley, 34, welcomed Edward, who weighed 7lbs 10oz, at their Surrey home at 8.20am on 13th May following a fast three-hour labour.

Sharing her birth story for the first time, Sam told OK!: “The whole time, I didn’t sit down as I didn’t want to slow down the labour, so I was just pacing around.

She’d prepared for a relaxing home water birth like she’d had with her middle child, daughter Rosie. But Sam Faiers’ labour took a dramatic turn when she decided to abandon the blow-up pool at the last second, and instead delivered newborn Edward standing up in the kitchen.

“I’d had Rosie in the water and it was beautiful, so I thought it would be the same with Edward. But when I got in the water, I just couldn’t get comfortable and immediately felt like I needed to get out.

“Instead, I went to a corner of our kitchen – Paul was standing behind me and I had my hands on his neck. How he held my bodyweight I don’t know, because I was putting all my weight onto him.

“He said a few days later he was still aching from it! So I was standing but squatting a little bit, then the midwife came underneath ready to catch the baby. Little Paul and Rosie were next to me and I gave birth to him standing up.”