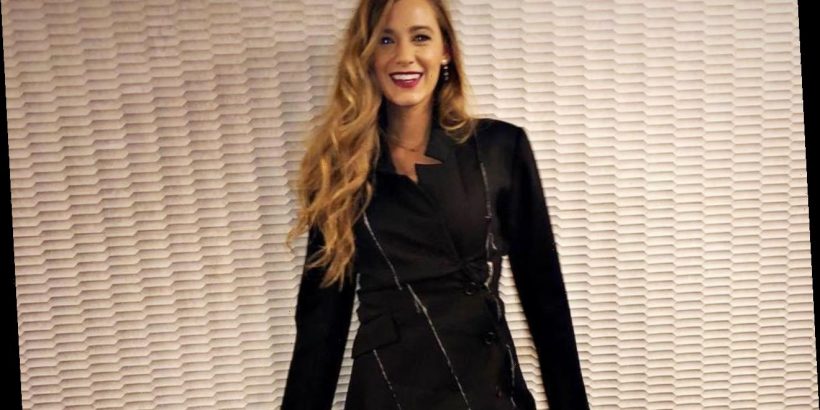 Sharing a photo of herself in a chic black outfit on ‘The Tonight Show Starring Jimmy Fallon’ in 2019, the ‘Gossip Girl’ alum complains that having no couture option was ‘alienating and confusing.’

AceShowbiz -Actress Blake Lively was made to feel “insecure” in her postpartum body after failing to find designer clothes in larger sizes.

The “Gossip Girl” star reveals her body confidence took a big hit following the birth of her third child, daughter Betty, in October, 2019 because there were hardly any couture options to choose from as she returned to work on the promotional trail.

In a series of Instagram Story posts on Friday, January 29, she shared a photo of herself in a chic black outfit on “The Tonight Show Starring Jimmy Fallon” in 2019 and explained, “I put together a @lavinoffical shirt and dress from (online retailer) @netaporter to make this pretty outfit. Because no one had samples that fit me after giving birth. And so many clothes from stores didn’t fit either. So. Many.”

“It doesn’t send a great message to women when their bodies don’t fit into what brands have to offer,” she continued. “It’s alienating and confusing. And I wish I felt as confident then as I do now, a year later looking back.”

Blake Lively opened up about insecurity she felt post-giving birth.

“That body gave me a baby. And was producing that baby’s entire food supply. What a beautiful miracle. But instead of feeling proud, I felt insecure. Simply because I didn’t fit into clothes. How silly is that in retrospect (sic).”

Back in 2018, the actress also shared about dealing with post-baby body. “Turns out you can’t lose the 61 lbs you gained during pregnancy by just scrolling through Instagram and wondering why you don’t look like all the bikini models,” she said at the time. “…10 months to gain, 14 months to lose. Feeling very proud.”