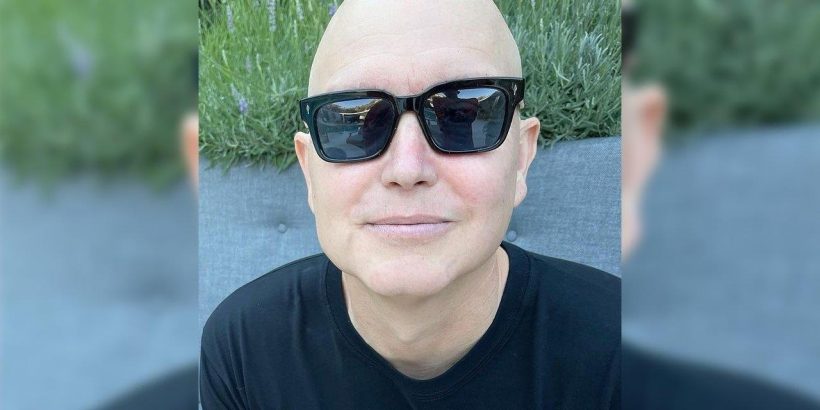 When sharing about his recent condition amid his cancer battle, the bassist of rock band Blink-182 reveals that he’s normally ‘getting pumped full of poison every three weeks.’

AceShowbiz –Mark Hoppus has shared a new update on his cancer journey. Taking to his Twitter account, the bassist of Blink-182 admitted to feeling “grateful” after finishing another round of chemotherapy for his stage 4 diffuse large B-cell lymphoma cancer.

On Wednesday, September 15, the 49-year-old rocker tweeted, “Today I’m grateful to not be going in for chemotherapy. It’s been three weeks since my last treatment.” The musician continued, “Normally I’d be going in today. ‘Normally.’ Damn. Getting pumped full of poison every three weeks is my normal.” He then added that on September 29, he will “get scanned” to find out whether the treatment worked. 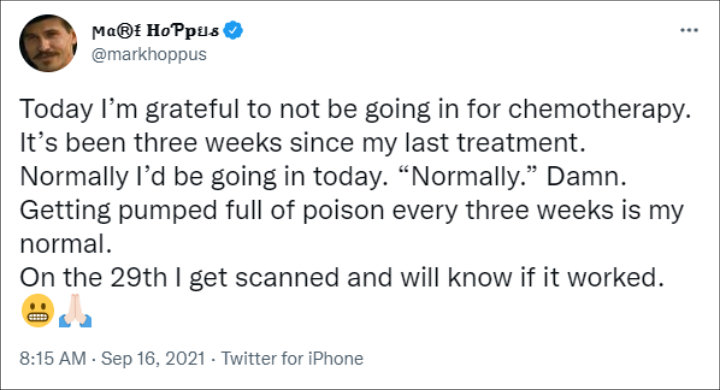 Mark Hoppus shared that he has finished his fifth round of chemotherapy.

Mark first went public with his cancer diagnosis in late June. The rock star opened up more about the disease during a Twitch live stream the following month, telling fans that his blood was trying to “kill” him. “My cancer’s not bone-related, it’s blood-related,” he shared. “My blood’s trying to kill me.”

“My classification is diffuse large B-cell lymphoma Stage 4-A, which means, as I understand it, it’s entered four different parts of my body,” Mark further explained his diagnosis. He continued, “I don’t know how exactly they determine the four-part of it, but it’s entered enough parts of my body that I’m Stage 4, which I think is the highest that it goes. So, I’m Stage 4-A.”

Then in early August, Mark shared that he was about to begin the fifth round of chemotherapy. “Chemo round five,” he captioned the snap that saw him sitting down at a medical clinic with an IV in his arm, adding, “Let’s heckin go.” In his post, he also wrote, “See you all again in seven to ten days…”

Following the fifth round of his cancer treatment, his hair is starting to grow back. Earlier this month, Mark posted a picture of his scalp on his Instagram page, captioning it, “Hahaha. Look at this trash. This is the top of my head right now. This is what God sees when He looks down upon His work and despairs. Cancer-a** head trying to grow back some hair. Awww. Poor little head. Keep your chin up, fighter.”

Despite the positive update regarding his hair growth, Mark admitted he’s “feeling terrible this week” but is doing his utmost to “stay positive and count my blessings.” He then concluded his post, “I hope everyone is doing great, staying healthy, and being kind to each other. If anyone needs me, I’ll be on the couch for the foreseeable future.”