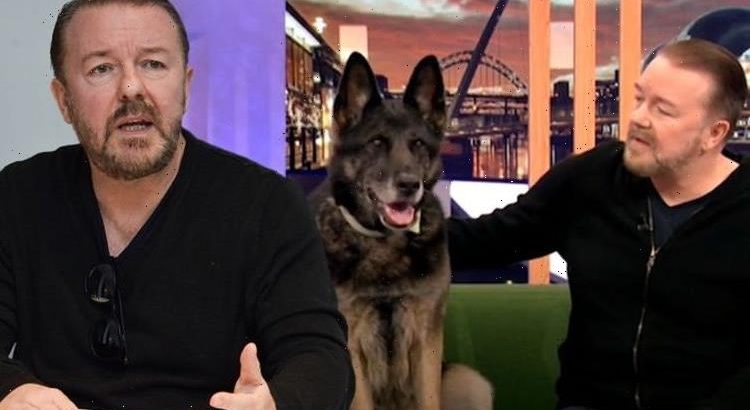 Ricky Gervais appeared on The One Show to promote season three of his show After Life, which dropped on Netflix last Friday. The comedian, 60, brought along Antilly the Wonder Hound, a professional stunt dog better known as Anti, who acts alongside him in the comedy drama.

Presenters Alex Scott and Alex Jones welcomed Ricky’s fluffy companion onto the sofa, who proceeded to lick his face enthusiastically despite his protests.

As soon as Ricky told Anti she was “such a good girl”, the German Shepherd got up and started smothering him in kisses, as the actor called out: “No, no, no!”

“She’s missed you,” remarked Scott, while Jones admitted:“They did say she’d be excited to see you…”

“I’ve got makeup on!” Ricky continued to protest, as both presenters replied teasingly: “Not any more!”

Remarking on a film that they had just shown to The One Show audience, Jones suggested Ricky was “very touched” by it.

In response, Ricky said: “I know. Honestly, nothing breaks my heart more than pets being separated from their owners.

“I can’t stand to think of an animal in discomfort, let alone hurt.

“Even the slightest bit of discomfort – I just can’t stand it. I want every animal to be as happy as Anti.

This prompted a little whimper from Anti, earning an “aww” from both presenters.

Jones went on to ask Ricky what it was about animals that get people “through difficult times”.

“They’re just better than people. No offence,” Ricky replied with a laugh.

“They’re members of the family. They’ve got so much compassion. I mean, dogs do everything for us. They guard us, they guide us, they can smell cancer.

“They’re incredible. You couldn’t invent something as good as a dog. They’re amazing.”

As Ricky spoke, the camera zoomed in on Anti’s face as she stuck her tongue out happily.

“And look at them, they’re perfect,” Ricky added. “What’s not to love?”

Ricky’s show After Life sees Tony, a local journalist, struggle with the death of his wife, Lisa – but it’s his beloved dog looking hungrily at her dinner bowl that stops him taking his own life.

The show, which asks big questions about the purpose of living, has won acclaim from critics and audiences alike.

Ricky has been with his real life partner Jane Fallon, 61, since 1984.

Series three of AfterLife is available to stream now on Netflix.

The One Show returns tomorrow night at 7pm on BBC One.