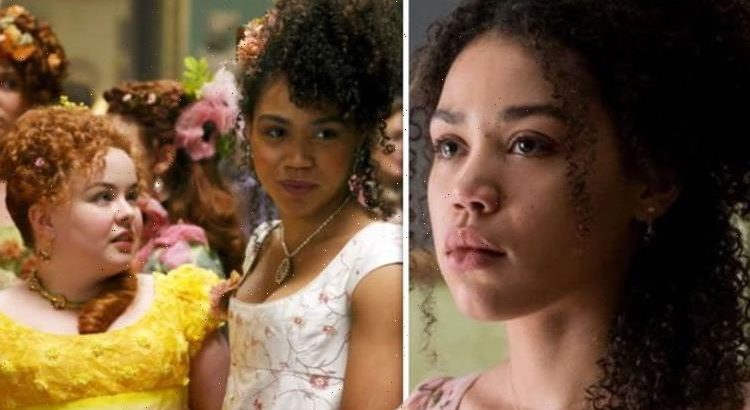 Ruby Barker, 25, has opened up about the highs and lows of being part of the Bridgerton cast in season one. The star, who plays Marina Thompson in the hit Netflix series, explained that although she relished the opportunity to learn from the rest of her co-stars about “what makes a good actor”, she felt an incredible amount of pressure due to the “anticipation” surrounding the show.

Speaking in an exclusive interview with Express.co.uk, Ruby recalled: “The best part was the opportunity to learn from the people around me.

“To really sort of learn about what it takes, and what makes a good actor.

“The most challenging part of my role, I suppose, was… it was all very challenging.

“But it all came very naturally to me.

“It was challenging sort of staying cool and staying chill, like, the anticipation, what you’re a part of, the scale, you know, the pressure, a lot of which I’m putting on myself.”

Referencing Eminem’s hit Lose Yourself, Ruby quipped: “I feel like I was in that b****y Eminem song, where he says, ‘You’ve only got one shot, one opportunity!’

“That was the feeling and the soundtrack in my head for seven months straight!”

Ruby worked closely with Derry Girls star Nicola Coughlan, 35, on Bridgerton, as they shared many scenes together.

Sharing an insight into their friendship behind-the-scenes, Ruby divulged: “She’s sweet as pie, she really is so lovely.

“The thing is, like, I want to say she’s cute, because she’s so cute!

“But she’s a 34-year-old woman, so I don’t want to patronise her or anything!

“But she is just the absolute epitome of cuteness in a human soul.”

Ruby’s character Marina started series one of Bridgerton as a new member of the ton.

Marina was sent to live with her distant relatives, The Featheringtons, so they could help her make her debut in London society.

However, it was soon revealed that Marina was pregnant, which prompted her to be hidden away from society in her bedroom.

After Penelope Featherington learned Marina was pregnant and not sick, as her mother had led her to believe, the latter informed her she had fallen in love with a boy at church named George Crane, who had since gone off to war in Spain.

He was also the father of her unborn child.

Lady Featherington then decided it would be a good idea to find her a suitable husband, who could be tricked into believing Marina’s baby was his.

However, this plan backfired when Lady Whistledown reported Marina was pregnant and had been since she arrived in London.

Unfortunately, after Daphne Bridgerton (Phoebe Dynevor) tried to help Marina by trying to get George to return to England, his brother Sir Phillip Crane (Chris Fulton) arrived to share the sad news that he had died on the battlefield.

Phillip then proposed to her, stating he would be doing his duty as George had taken liberties with her honour, which she eventually accepted before leaving London with him.