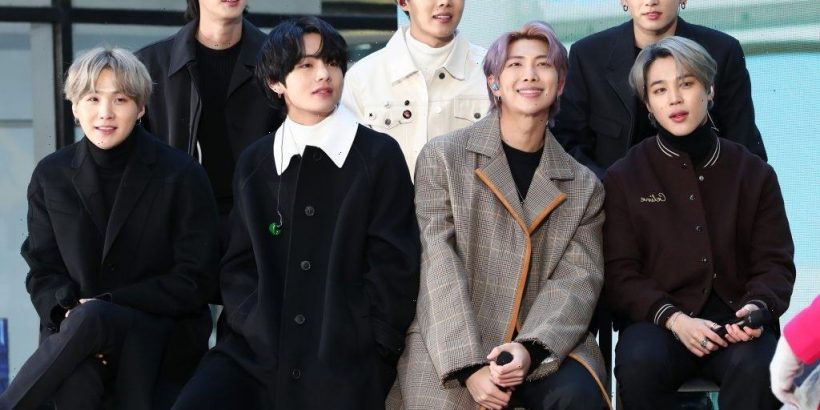 On May 25, BTS appeared on The Late Show with Stephen Colbert. During the talk show, Jin, Suga, J-Hope, RM, Jimin, V, and Jungkook took part in a skit with Colbert and performed their new single, “Butter.” In the skit, the BTS members showed their comedic side as they expertly explained different hand gestures.

BTS performed a skit on ‘The Late Show with Stephen Colbert’

Any fan who watches the variety show Run BTS! knows that Jin, Suga, J-Hope, RM, Jimin, V, and Jungkook are true comedians in addition to being talented musicians. On The Late Show with Stephen Colbert, BTS showed off their understated comedic skills.

“And tonight, I’m thrilled to announce that BTS has agreed to give ‘A Late Show’ an exclusive look at a whole bunch of new hand gestures that all the cool kids are going to be using next,” he said.

To start off the sketch, J-Hope showed new hand gestures for other body parts like the heart, specifically, the kidneys and the long intestine.

V held up a peace sign and said, “This is a V, which is for my name, V. But it also means peace. Or even better, if you add a finger, piece of pizza.”

As the skit continued, the septet’s hand gestures became more and more elaborate. Jimin told a story with his hands. His first gesture demonstrated a person going for a walk, and his last hand gesture escalated to someone having their pogo stick stolen.

Jungkook then claimed that he created the Vulcan salute from Star Trek.

“This one means ‘live long and prosper,’” he said. “I invented it and Star Trek learned it from me. How is that possible? Because Star Trek takes place in the future.”

Being a fan of baseball, Suga acted out a complex batting signal a base coach would give a plyer.

“That means the batter is going to ‘fake bunt.’ Important if you’re a base coach,” Suga said.

V proceeded to take bunny ears to the next level and introduced a new hand gesture called the Double Bunny.

“Everybody knows this one, which is giving a person bunny ears. It’s cute. But this is called the Double Bunny. It’s stronger. More powerful. Dangerous. Beware the Double Bunny,” he said from behind Jungkook as he held up bunny ears with both of his hands.

Toward the end of the sketch, Jimin and Jin explained a complicated hand gesture that requires two people. The two BTS singers made a symbol that represents “Late Night TV host Stephen Colbert.”

Jimin then warned viewers to use the hand signal with caution, because sometimes it has the “power to summon Stephen Colbert.” On cue, Colbert appeared.

“D*mn it, Jimin, again? You know I have a show tonight! It’s a 16-hour plane ride back from Korea,” Colbert exclaimed.

At the end of the skit, RM introduced a new hand gesture that represents BTS’ new single, “Butter.”

“Oh. Do not eat your fingers, Stephen,” RM warned.