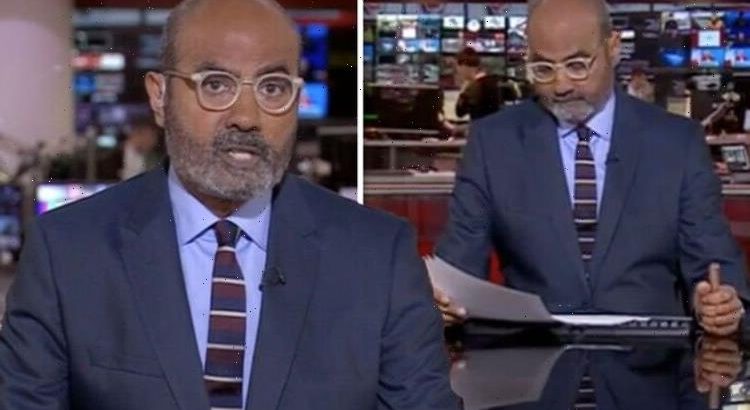 George Alagiah on living with COVID-19 and cancer

BBC newsreader George Alagiah, 66, left viewers and colleagues emotional today over his return to broadcasting. Earlier this afternoon, George had taken to Twitter to announce his return to the news studio following months of treatment after he was diagnosed with Stage 4 bowel cancer eight years ago. The BBC star’s announcement was instantly met with delight from his fellow BBC colleagues and his fans, who expressed their excitement at seeing him return to his newsreading duties.

So good to be with the News at Six team again

In view of his 62,100 followers, George told how he’s back hosting the News at Six.

The BBC presenter wrote: “I’ll be back in the @BBCNews studio today after months of treatment.

“So good to be with the News at Six team again,” he ended his post.

Following the news, fans of the BBC legend took to Twitter to express their delight at having George back on their screens.

“Tears in her voice.

“You can’t keep a good man down!” they ended the tweet.

Twitter user @CecWalker added: “Be great to see you back George.

“Your excellent delivery and gravitas is just what we need right now.

“So glad you ate recovering well!x”

The star’s BBC colleagues also rushed to congratulate George on his return to the News at Six.

BBC News’ Health Editor Hugh Pym wrote: “Great to see you back on the Six George.”

While BBC News at Ten presenter Huw Edwards added: “Some really good news in a world of bad news.”

George’s news comes after he was diagnosed with stage 4 bowel cancer in 2014.

He underwent 17 rounds of chemotherapy before making his return to the newsroom.

However, the cancer returned for a second time and went on to spread to his lymph nodes and lungs.

In 2020, George decided to put his presenting duties on hold following recommendations from his doctor after contracting Covid.

But last year he announced that the cancer had spread and he needed to undergo more chemotherapy.