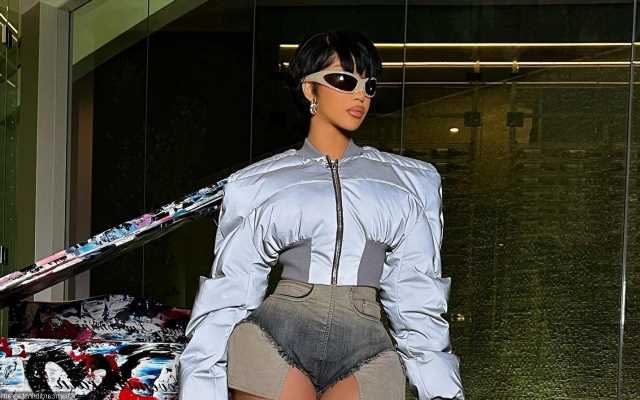 Fans are wondering whether the ‘Bodak Yellow’ raptress just underwent cosmetic procedure after she showcases her very small waist and bouncy bottoms on social media.

AceShowbiz –Cardi B is leaving her fans wondering whether or not she has gone under the knife. The “I Like It” raptress has sparked rumors that she recently had hip surgery after she flaunted her extremely tiny waist.

On Tuesday, January 24, the New York-native hip-hop star posted and quickly deleted an Instagram Story video of her showing off her small waist and bouncy bottoms. “I know…really really small. I know,” she said while posing in the mirror. “Literally…[small],” she added, before flashing a middle finger to the camera.

After the clip was reposted by The Neighborhood Talk’s account, fans rushed to the comments section to share their thoughts. Many asked why Cardi’s waist looked super small, with one writing, “Did she get more work done??” and another chiming in, “Did she get something added??”

One user suggested that Cardi is addicted to undergoing cosmetic procedures to enhance her look. “One thing Cardi gonna do is frequent a surgery table…it’s an addiction atp and Offset need to get her some help…,” the said person commented.

“It looks fking ridiculous now cardi,” another weighed in, while a separate person opined, “That’s enough surgery. Seriously.” Someone added, “I wish these doctors would jus tell them no. You don’t have enough legs.”

Others, meanwhile, likened her new appearance to a baby wearing a full diaper. “Lmfaoooo that s**t ridiculous. It look like a full diaper,” one Instagram user remarked, with a second agreeing, “Looks like an adult diaper.” Another quipped, “It’s giving squidward after them crabby patties.”

Cardi, who shares daughter Kulture, 4, and son Wave, 1, with her husband Offset, subsequently posted a photograph of her younger sister, Hennessy, in two revealing outfits. The images divided opinion among Cardi’s social media followers but the chart-topping star quickly fired back at the critics.