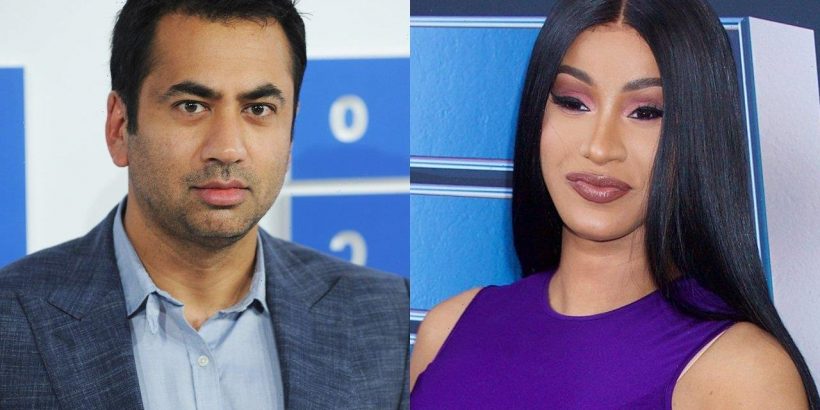 After the ‘Harold and Kumar’ star shares his dream of his big day that involves the Bronx femcee, she responds by saying that she is ‘licensed to do that’ and is ‘down’ for it.

AceShowbiz –Kal Penn has at least one box to tick from his wedding check list. As he recently announced his plans to marry his longtime boyfriend Josh, the actor may have booked a marriage officiant and she is no less than an A-list artist.

Cardi B has publicly stated that she is up for the important role in the Montclair-born star’s upcoming nuptials. This was after Kal revealed on Twitter his literal dream about his wedding that included the Grammy Award-winning artist.

On Wednesday, November 3, the former White House staff member in the Barack Obama administration revealed his dream which was seemingly inspired by his real encounter with Cardi. “Cardi B was on my flight to LA,” so he tweeted. “I fell asleep and had a dream that she officiated our wedding on the plane and the three of us walked out of LAX holding hands.”

Catching wind of this, Cardi was quick to respond as writing, “First, why didn’t you say hi!” Informing Kal that she is a licensed officiant, the Bronx native offered to officiate his wedding, “Second, I’m licensed to do that soo… … ..let me know.”

The Kumar Patel in the “Harold & Kumar” films was thrilled to hear her response and wrote back, “You’re the best. Was gonna say hi but didn’t want to be disrespectful (your do not disturb light was on). But holy s**t let’s do it! We’re down if you’re down!” Apparently sealing the deal, the “WAP” hitmaker said she would start prepare her outfit for the nuptials as saying, “I’m down I’ll get my suit.”

Kal announced his engagement to his longtime partner Josh while at the same time coming out as gay. In his new memoir “You Can’t Be Serious”, he reveals he was working at the White House for President Barack Obama when he met his soulmate and they formed a relationship over NASCAR.

“I thought, ‘This obviously is not going to work out. I have one day off from The White House and this dude is unironically watching cars go around and make left turns?’ ” he writes. “Next thing you know, it’s been a couple months and we’re watching NASCAR every Sunday.”

Kal additionally told PEOPLE, “I’m really excited to share our relationship with readers. But Josh, my partner, my parents, and my brother – four people who I’m closest to in the family – are fairly quiet. They don’t love attention and shy away from the limelight.”