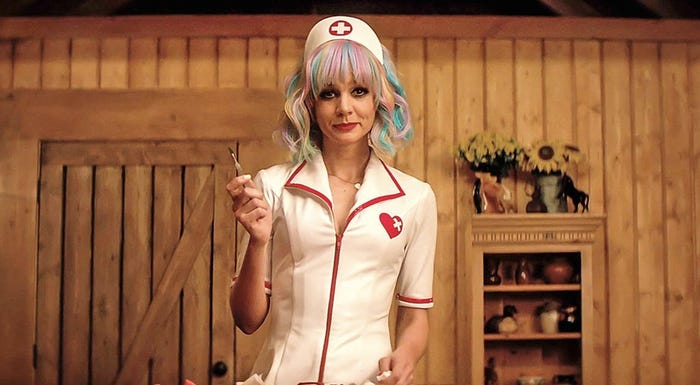 Carey Mulligan called out a film critic who opined that she was "a bit of an odd choice" for her "femme fatale" role in her new movie "Promising Young Woman."

In his review for Variety, critic Dennis Harvey implied that Margot Robbie, who is a producer on the movie, would have been better suited to playing the lead, Cassandra.

"One can (perhaps too easily) image that role might once have been intended for [Robbie]," Harvey wrote. "Whereas with this star, Cassie wears her pickup-bait gear like bad drag; even her long blonde hair seems a put-on. The flat American accent she delivers in her lower voice register likewise seems a bit meta, though it's not quite clear what the quote marks around this performance signify."

In a New York Times profile, Mulligan brought up the Variety review when asked if she had read any of the critics' takes.

"I read the Variety review because I'm a weak person," she told Kyle Buchanan.

"It felt like it was basically saying that I wasn't hot enough to pull off this kind of ruse," said Mulligan, who noted that she can still recite some of the lines from the review.

"It drove me so crazy," she continued. "I was like, 'Really?' For this film, you're going to write something that is so transparent? Now? In 2020?' I just couldn't believe it."

Insider has reached out to Variety and Harvey for comment.

In the acclaimed dark drama, Mulligan plays Cassandra who has thrown away a career in medicine to dedicate her life to wreaking havoc on men who prey on unsuspecting women.

She does this by acting drunk at bars and clubs and when men pick her up and bring her to their homes she reveals she's actually sober and makes the guy wish he never laid eyes on her that night.

Harvey's take is a wicked irony seeing that the intention of the movie's director, Emerald Fennell, is to blow up all the expectations placed on women in society.

"We don't allow women to look normal anymore, or like a real person," Mulligan said in the Times story. "Why does every women who's ever onscreen have to look like a supermodel? That has shirted into something where the expectation of beauty and perfection onscreen has gotten completely out of control."