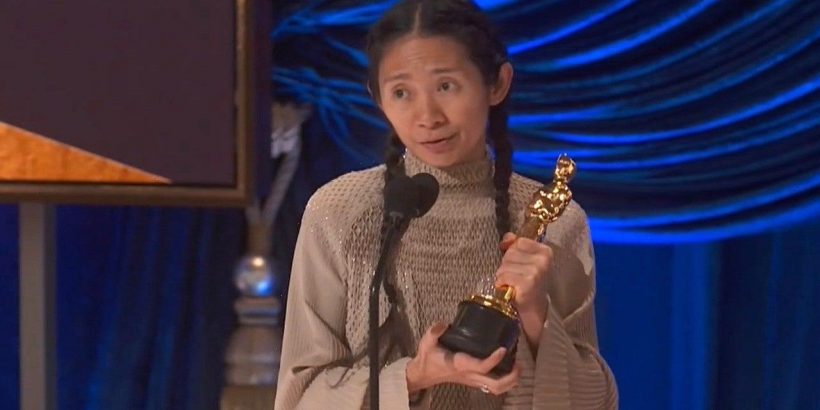 Chloe Zhao completed her awards season sweep on Sunday, taking home the Academy Award for Best Director for her stunning 2020 film, Nomadland. With the win, Zhao becomes the first woman of color, and second woman ever, to take home the Oscars’ top directing honor.

The Chinese filmmaker and Promising Young Woman‘sEmerald Fennell became just the sixth and seventh female nominees in the history of the category with their nods this year; Kathryn Bigelow is the only other woman to win Best Director, for 2009’s The Hurt Locker.

“When I was growing up in China, my dad and I would play this game. We would memorize classic poems and text and try to finish each other’s sentences,” Zhao recalled during her acceptance speech, before reciting one that translates into, “People at birth are inherently good.”

“I have always found goodness in the people I met,” she continued, adding that “this is for anyone who has the faith and courage to hold onto the goodness in themselves.”

Zhao was the undisputed favorite heading into Oscars night, despite also being nominated against celebrated filmmakers like David Fincher for Mank, Lee Isaac Chung for Minari and Thomas Vinterberg for Another Round.

Thanks to all of her wins, the 39-year-old director — whose next project is Marvel’s Phase 4 epic, The Eternals — has given a number of heartfelt speeches over the course of this year’s awards season. She was always quick to thank her leading lady, Frances McDormand, and the cast of real-life adventurers who appeared in the film and lent their support to the creative team.

“I especially want to thank the nomads who shared their stories with us,” Zhao said during her Best Director acceptance speech at the Golden Globes. “I asked one of them, Bob Wells, to help me out here, and this is what he said about compassion: ‘Compassion is the breakdown of all the barriers between us. A heart-to-heart bonding. Your pain is my pain. It’s mingled and shared between us.’ This is why I fell in love with making movies and telling stories.”

In her DGA speech, Zhao took a moment to pay tribute to each of her fellow nominees, praising their work and calling out the specifics of what she appreciated about each of their films, while at the BAFTAs, the director also acknowledged the significance of her win for other Asian women and minority groups. “If this means more people like me get to live their dreams, then I feel very grateful,” she shared.

Follow along at ETonline.com for all our Oscars live updates, including the Oscars winners list, updated as trophies are handed out.