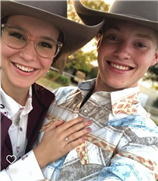 With all the nauseating revelations surrounding Josh Duggar’s upcoming child pornography trial, it’s easy to forget about the regular, everyday brand of Duggar grossness that used to make so many tabloid headlines.

While Josh obviously took this mentality to its most appalling extreme, the family has always demonstrated a troubling fixation on the sex lives of the very young.

Sure, the Duggar courtship rules forbid any sort of premarital physical contact between the sexes, but Jim Bob also allows for very, very young people to get married, and he encourages them to start breeding the moment they do.

And in some instances, the ball starts rolling before both parties have even reached legal adulthood.

That was the case for Justin Duggar and Claire Spivey who got engaged last year following a whirlwind courtship.

The exact date of Justin and Claire’s engagement has long been a subject of fascination among Duggar fans and critics.

The big news was announced in November of 2020, the same month that Justin turned 18.

Fans have long been curious as to whether Justin popped the question before or after he became a legal adult on the 15th.

And now, it seems we have our answer.

Over the weekend — on November 6 — Claire shared an Instagram post celebrating the anniversary of the day that Justin got down on one knee.

“Hard to believe it has been one year since our engagement! Such a whirlwind day filled with joy!” she captioned a montage of photos from their time together.

It seems that much of that time has been spent in matching cowboy getups, but we suppose that should come as no surprise, given that the couple has relocated to Lubbock, Texas.

(No, we’re not under the mistaken impression that most Lubbock residents routinely dress up in cowboy attire; we just know that the Duggars tend to latch onto the corniest manner of expressing themselves wherever they are.)

Anyway, whether she intended to or not, Claire confirmed that she and Justin were engaged when she was 19, and he was just 17 years old.

She wisely turned off comments on her post, but not surprisingly, the couple was roasted to a crisp on the always-entertaining r/DuggarSnark subreddit.

“No 17-year-old should be engaged… that’s not even a legal adult. Insane,” one person wrote, according to the Daily Mail.

“Aren’t most 17-year-old boys thinking about how to ask someone to prom? Gah…” another chimed in.

“Man, their families just remind me how grateful I am that my parents were normal and let me date who I wanted at my own pace and didn’t creepily involve themselves in my sex life,” a third chimed in.

“This is sad. You’ve barely experienced life at that age. You hardly understand yourself, never mind a partner,” yet another pointed out.

Yes, divorce is strictly forbidden in the Duggars’ world, so Justin and Claire will almost certainly “make it work.”

But anyone who can honestly recollect what they were like at age 17 is probably very, very happy that the adults in their life prevented them from doing something irreversibly stupid like getting engaged.

Sort of odd timing for Claire’s announcement, given that Josh’s trial is soon to get underway, and the Duggars disgusting fixation on the sex lives of the very young is currently making more headlines than ever before.

But hey, maybe she figured if she casually drops this bombshell now, it’ll be overshadowed by even grosser things happening within her husband’s family.