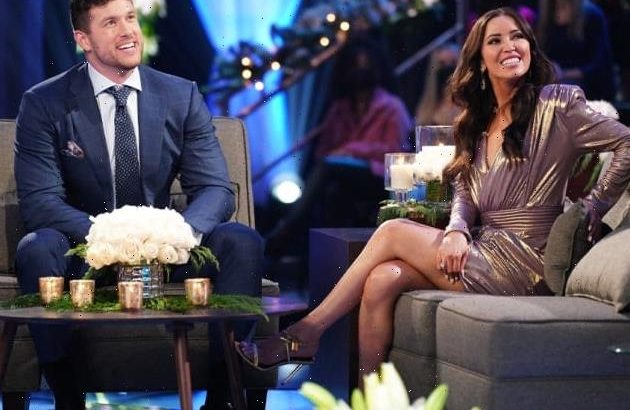 He knows what you probably think of him.

And if the future Bachelor wasn’t aware… ABC made a point of making him aware this past Monday night.

On the After the Final Rose special that aired following the conclusion of Michele Young’s run as The Bachelorette, Echard sat opposite host Kaitlyn Bristowe on stage.

“Joining us now is a man who really does need an introduction because honestly no one knows who he is.”

Indeed, Echard finished eighth on Young’s season, failing to advance nearly as far as past Bachelors who were introduced to viewers as a Bachelorette suitor.

As a result, Kaitlyn told Clayton she wanted to touch on the “elephant in the room” and how “there’s been a lot of mixed reactions” to him being picked as the next Bachelor.

She said the pair were “facing your haters head on” and proceeded to read some of “the more interesting comments” about him on social media.

(The main point of contention? That executives selected Echard because he’s white; Young’s final four were all men of color.)

Roses are red, violets are blue, Clayton is the Bachelor and I just puked in my mouth #ICanStillTasteIt.

They found 30 women desperate enough to date this guy? Where?! #quarantinegoggles.

I hope Clayton uses protection in the fantasy suites, otherwise 9 months later there are gonna be a lot of baby Shreks running around.

It’s not Clayton’s fault that producers seemingly chose him due to his skin color.

To his credit, meanwhile, Echard responded well to all the hatred.

He even said the above Tweets were “pretty PG” compared to some other messages he’s received.

“Listen, I really hope that just people do give me a shot,” he replied on air.

“Because my journey is authentic and I really did give my best and I think people will see that.”

Earlier this month, members of the Bachelor Diversity Campaign, a collective of fans who want to see the show step up its commitment to diversity, issued a strong rebuke of Clayton as The Bachelor.

“It’s a tired choice for a tired audience that is craving and demanding more,” this coalition said to Yahoo Entertainment.

“We have seen this show before, quite literally over 20 times.”

It’s true: Matt James has been the only Black Bachelor to date — and his casting led to such a controversy that Chris Harrison was eventually forced out of the franchise.

“The criticism of choosing Clayton as the next Bachelor has nothing to do with Clayton himself. It can’t be personal actually, because viewers don’t know him,” added the Bachelor Diversity Campaign.

“He was not a primary contender on the show and we weren’t given a chance to learn his story.

“So the fact that he was chosen as the Bachelor over BIPOC contestants who went further in the process, and therefore had more screen time and audience exposure, highlights once again that ABC makes the show it wants to.

“The question really is, why does ABC continue to want to make a show with a white lead when there are multiple Black contestants they had to pass by to do so?”

Echard debuts as The Bachelor on Monday, January 3 at 8/7c.

Visit our section of The Bachelor spoilers to find out who advances to his final four.