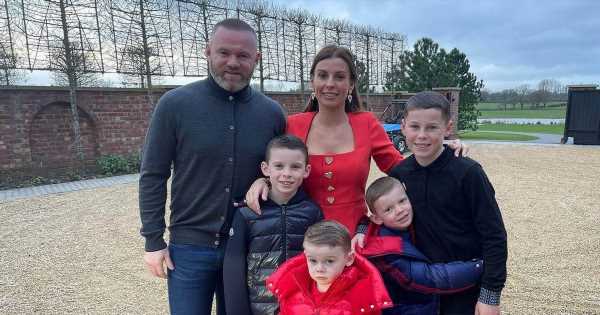 His dad, Wayne Rooney, 36, is one of the world’s best footballers, and it looks like the apple doesn’t fall far from the tree as Wayne and Coleen Rooney’s son, Klay, eight, headed off to a Manchester United football tournament.

The eight year old was the spitting image of his famous father as he could be seen looking shyly into the camera. He was dressed for the occasion in his full United U9’s Manchester United outfit, complete with a snug black coat, trackie bottoms and Adidas travel bag.

OK!'s best wedding covers of all time including David and Victoria Beckham's 1999 nuptials

Childhood sweethearts Coleen and Wayne first started dating when they were just 16 years old and went on to marry in a lavish ceremony in Portofino, Italy in 2008, which was exclusively covered by OK!

Klay isn’t the only one of their sons to play for Manchester United, as Kai also signed to the United U12 team in December 2020.

Wayne and Coleen often post snaps of their sons donning their Manchester United kits. The club is where their dad saw some of his most record-breaking successes in football, and he is the record goalscorer for both the club and the England national team.

Having retired from playing the sport, Wayne is now the manager of EFL Championship club Derby County.

The family finally moved into their £20million Cheshire mansion in December 2021, after purchasing the plot of land for £4million in 2017.

The palatial property, which is set on 40-acres of land boasts six bedrooms, a home cinema, snooker room, indoor swimming pool and an underground spa. There’s even a football pitch where no doubt Wayne spends time teaching his sons his famous skills.

Wayne and Coleen recently starred in in their very own tell-all documentary named Rooney, which premiered on February 11 on Amazon Prime,

In the documentary, Coleen opened up on Wayne’s numerous infidelities, and admitted that she has learnt to "live with” them over the years.