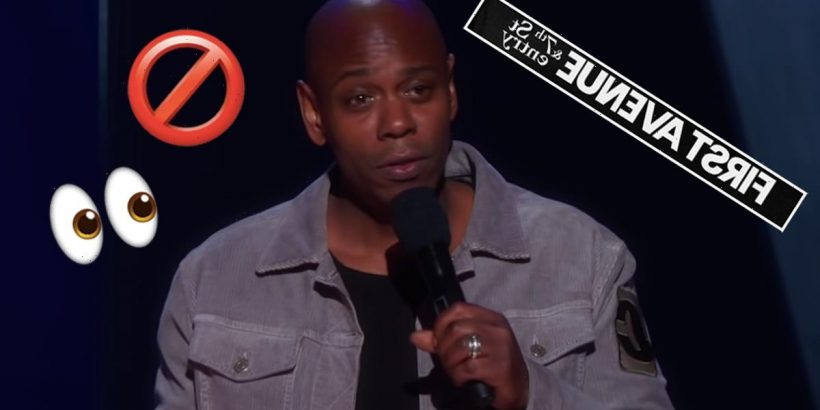 Dave Chappelle’s latest comedy show was just canceled — but not by him.

If you’ve been staying even somewhat caught up over the last year, you know that the star has stirred up a lot of mixed feelings regarding his comedy specials — specifically his takes on the LGBTQIA+ community, with trans individuals in particular. While the comedian has still managed to pull an Emmy nomination for his material, not everyone is as pleased with Chappelle, including fans of one Minneapolis venue. In a statement released on Instagram Wednesday, First Avenue explained their reasoning behind abruptly cancelling his set just hours before:

“The Dave Chappelle show tonight at First Avenue has been cancelled and is moving to the Varsity Theater. To staff, artists, and our community, we hear you and we are sorry. We know we must hold ourselves to the highest standards, and we know we let you down. We are not just a black box with people in it, and we understand that First Ave is not just a room, but meaningful beyond our walls.”

The legendary theater was featured heavily in Prince’s iconic 1984 film Purple Rain, and many feel that it should be declared a historical landmark, especially after its 50th anniversary in 2020. The statement continued:

“The First Avenue team and you have worked hard to make our venues the safest spaces in the country, and we will continue with that mission. We believe in diverse voices and the freedom of artistic expression, but in honoring that, we lost sight of the impact this would have.”

At first, the IG statement sounded like it was apologizing for cancelling the 48-year-old’s show, but now it’s clear that they’re apologizing for agreeing to host him in the first place! It should be noted that Dave has performed at First Avenue many times before, but as stated earlier, his more recent remarks towards the trans community have split his fandom.

In his controversial October 2021 Netflix special The Closer, he claimed that he was “Team TERF,” an ideology which aims to invalidate trans women as women. The Mark Twain Prize winner explained in the special:

The comedy special drew high criticism, and even protests and employee walkouts from within Netflix itself. Chappelle’s exclusionary remarks were even the explanation for a fan’s onstage attack of the comedian in May, as Isaiah Lee explained to The New York Post:

Yeah, we can definitely see how the sort of atmosphere Dave incites doesn’t fit with First Avenue’s dedication to safe venues… If you look further into the event space’s IG comments on that post though, you’ll find plenty of his die-hard followers bashing the decision, with some writing:

He is a legend and doesn’t need your approval. You should be embarrassed and need to check yourself. How many acts have played there that don’t toe whatever this line you have drawn.

“I just think it was a bad business move—cancelling Dave’s show. Imagine what could have been laughed at, discussed, or explored. Your audience won’t get that privilege.”

Yeesh! Comments have been disabled as of Thursday morning. In addition to Wednesday’s show, fans can still catch the act at Varsity Theater Thursday and Friday night, where it will be a “phone free experience.”  See the full post (below):

What’s your take on the backlash of Dave’s controversial comedy bit from fans of the theater, Perezcious readers? Let us know in the comments below.