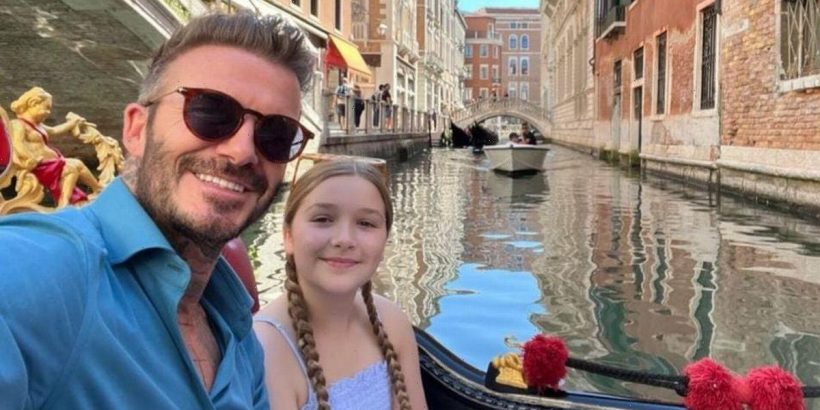 David Beckham has shared some adorable pics of him and daughter Harper exploring Venice together.

The former England footballer, 47, is enjoying a summer holiday in the scenic Italian city with daughter Harper, 10.

The father-daughter duo are making some "special memories" together on the trip, with plenty of adorable photos and videos posted to David's Instagram page and story.

David first shared a cute video of Harper and him giggling at the side of the road after buying a cute hat for his daughter. He starts the video saying: "We came to chic Venice, didn't we Harper? And what did we buy in Venice, Harper?"

His daughter replies "Yeah!" before showing off her new hat with a cute face on it, before pulling the tabs on her hat to make the ears flop up and down.

She could also be seen eating some gelato, to which David asked her: "And what time is it for ice cream in the morning?"

David's post had a couple of famous faces responding to him, with Lucali restauranteur Mark Iacono writing "Warms my heart" followed by a heart emoji.

Doting mum Victoria replied: "Did u bring mummy one of those hats home?!?! I love u both sooooo much!!! X special time with daddy is everything!!! X."

On his Instagram story, David then posted a number of adorable snaps of his time with Venice, including himself and his only daughter riding a gondola.

The first photo was taken moments after the video was shot, with Harper still wearing her hat and eating gelato.

Harper could be seen wearing a lovely lilac dress, her cute new sun hat, and some red Nike trainers, while David was wearing a teal coloured shirt, white trousers, and brown loafers, finishing the look with a pair of sunglasses and holding an incredibly pink fan.

The next photo shows the two sat in a gondola enjoying a relaxing boat trip through Venice's waterways, with Harper resting her head on David's shoulder.

After that, the pair were on another boat with a cabin, with the two standing up and looking over the roof of the boat and smiling. David captioned this snap saying "I mean come on" along with a sticker that said "Love You".

Then he posted a photo of young Harper looking out at Venice from their hotel window, captioning the post: "Love you mummy @victoriabeckham".

David then added another photo from their gondola ride, this time a selfie, with the pair grinning as you could see the blue skies of Venice reflected in the water.

He then uploaded a second selfie, this time on the other boat, with David holding his arm around Harper and the pair smiling at the camera as the evening sun reflected on the water.

This time, David was in a light blue shirt and a brown jacket, and styled the look with some brown, square sunglasses and a watch.

To finish off the holiday snaps, he uploaded a video of himself dramatically opening up the pink fan pictured earlier in the day, before fanning himself with it.

Harper could be heard giggling and captioned the post saying "Daddy stop showing off".

For updates on all your favourite celebs, sign up to our daily newsletter here .