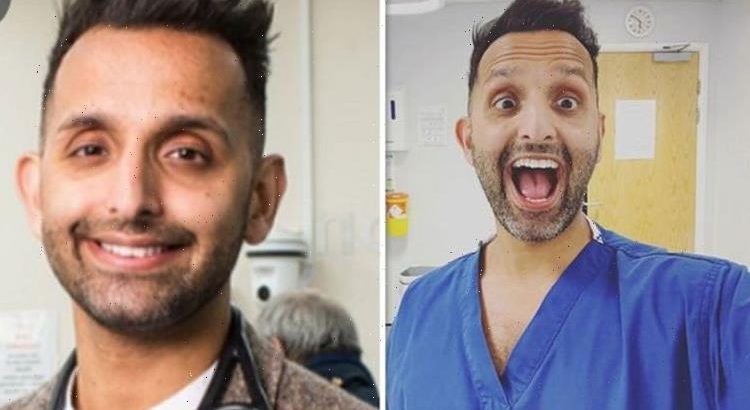 TV doctor Amir Khan, who is a regular on Good Morning Britain, has spent a decade working at the same practice in West Yorkshire. The Bradford-born GP recently took to Twitter and shared plans of what his wedding could possibly look like.

In view of his 165,000 followers, the GMB practitioner shared a candid clip of a horse-drawn carriage followed by a small procession.

The TV star explained that he told his mum, who he affectionately refers to as “Mama Khan”, to help make it happen.

Taking to the micro-blogging site, Dr Amir captioned the post: “Told #MamaKhan I want to arrive at my wedding like this.

“She said she will hook me up!”

The NHS GP has kept his relationship status under wraps and is believed to be single.

The post which was shared in February last year was inundated with comments from his legion of followers.

Shazzy remarked: “Dr Khan. I really thought you were married with children when I heard about your half-term break to Copenhagen!”

Dr Amir is said to be single with no children of his own but he is a devoted uncle and godfather.

He often takes to social media and shares pictures with his family members.

Meanwhile, the GP, who regularly appears on BBC Breakfast and ITV’s This Morning, said his cousin Arif does heart transplants and has received six marriage proposals – while he’s only ever had one.

He told The Times: “In terms of who is considered coolest, the medical profession can be a bit like the film Mean Girls.

“The surgeons – like my cousin Arif, who is a cardiothoracic surgeon – look down on us GPs because they think we treat colds and sniffles.

“But that’s not the case at all. We often see the beginnings of very serious conditions.”

At the time, he also dished on bizarre moments he experienced during his time as a medical professional.

In his book, The Doctor Will See You Now, recalled he was browsing bedding plants, when a man approached him and dropped his trousers, demanding he took a look at a rash on his groin.

Dr Amir added he’s also had a woman “thrust her painful breasts in his face” while food shopping and “the odd bum cheek as well”.