Dentist Jerret Rosenborough was shot along with two others in an apparent robbery attempt.

Rosenbourough is a dentist and part-time rap artist who goes by the name Dr. Rose.

The shooting occurred on the 4200 block of Central Expressway around 9 p.m. local time on Thursday. All three victims took themselves to the hospital and his current condition is unknown.

Photojournalist Avi Adelman reported that Rosenborough was attacked inside his dental practice and was shot when he attempted to flee in a vehicle.

The vehicle in question appears to be his G-Wagon that he has been seen posing with on his Instagram page. Photos of the G-Wagon released on social media show the car is riddled with bullets.

The Dallas rapper and dentist, known as Dr. Rose, is reportedly being treated at the Baylor University Medical Center. 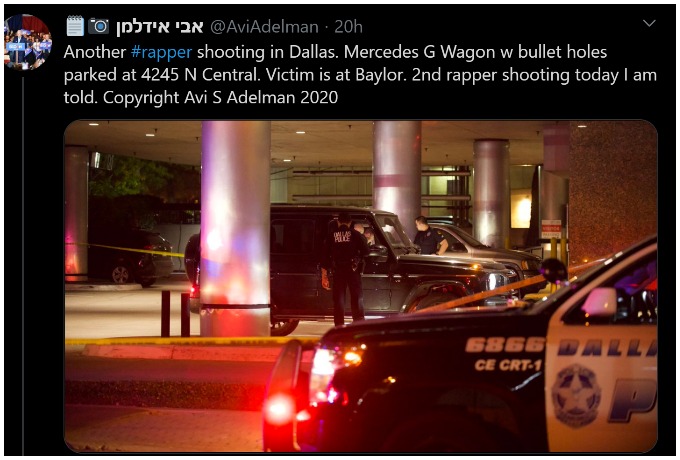 No connection to Mo3’s murder

Dr. Rose is the second rapper shot this week in Dallas, Texas.

Melvin A. Noble, known as Mo3, was shot dead on a Dallas highway this week in broad daylight. The 28-year-old rapper was sitting in his car when he was approached by a gunman. Noble exited his car on the highway and began to run away from the shooter before he was chased and shot to death.

Dallas police say that there is no connection between the two rap artists being shot only days apart. M03’s manager also expressed doubt about the shootings being connected, according to a local report.

Dr. Rose grew up in poverty

He is a graduate of Texas A&M University Baylor College of Dentistry. A short bio on his dental practice website reveals that he became a successful dentist despite being surrounded by poverty and crime.

“Growing up in one of the worst poverty-filled neighborhoods in Dallas, odds were against me even though it sounds like a movie cliché,” he shared on the dental practice website. “Family members were involved in the streets, but I kept to myself and found a home in sports.”

His Instagram page shows that he performs a variety of dental procedures and his clientele includes celebrities.

Police have not named any suspects and the crime is still being investigated.

Dr. Rosenborough and the other two victims in the shooting are currently receiving treatment and their condition is unknown.