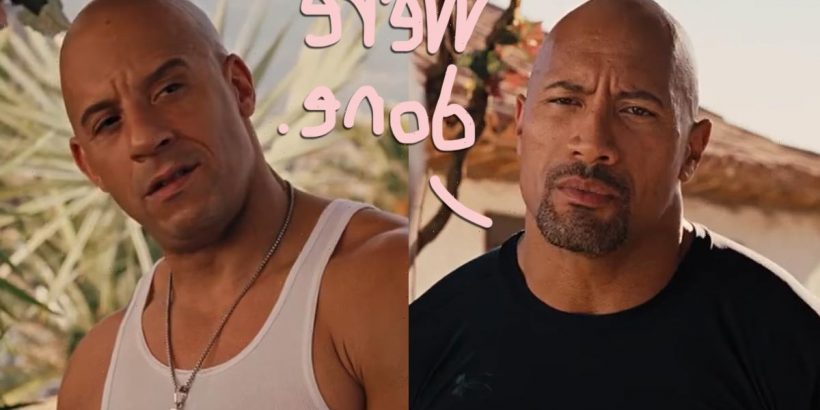 Well, sounds like this beef didn’t so much get squashed as, well, driven away from at full speed.

As you’ve probably heard, Dwayne “The Rock” Johnson and Vin Diesel had a pretty massive falling out on the set of The Fate Of The Furious. Neither was too forthcoming about what happened, but we do know The Rock wasn’t too happy with his co-star’s behavior. He later wrote the definitive slam on Instagram, saying:

“My female co-stars are always amazing and I love ’em. My male co-stars however are a different story. Some conduct themselves as stand up men and true professionals, while others don’t. The ones that don’t are too chicken s**t to do anything about it anyway. Candy asses. When you watch this movie next April and it seems like I’m not acting in some of these scenes and my blood is legit boiling — you’re right.”

Yeah, it wasn’t long before we learned exactly which male co-star he was talking about, and eventually DJ admitted the two had “an important face-to-face” in his trailer which made him realize they had a “difference in philosophies” on collaboration. Which is the classiest way we’ve ever heard someone called a big jerk.

The fallout of the feud was that instead of having to act onscreen with Vin again, the WWE superstar spun off from the main Fast & Furious movies to his own two-hander with Jason Statham, Hobbes & Shaw.

Photos: Stars Who Refused To Film Together

Well, it turns out he won’t even do spinoffs anymore — he’s done with the franchise entirely!

Last month Diesel, who also serves as a producer on the Fast movies, gave his own two cents about the dormant dispute in a Men’s Health interview. Brazenly, he tried to make it sound like he was just pushing The Rock to get there with his acting:

“It was a tough character to embody, the Hobbs character. My approach at the time was a lot of tough love to assist in getting that performance where it needed to be. As a producer to say, ‘Okay, we’re going to take Dwayne Johnson, who’s associated with wrestling, and we’re going to force this cinematic world, audience members, to regard his character as someone that they don’t know’ — Hobbs hits you like a ton of bricks. That’s something that I’m proud of, that aesthetic… I would do anything I’d have to do in order to get performances in anything I’m producing.”

Wow, the implication that the world’s biggest movie star needed that kind of help four movies into his run? It doesn’t get much more insulting.

So obviously someone had to get Johnson’s take on that angle. When The Hollywood Reporter asked for their new profile, the Jungle Cruise star brushed off Vin’s condescension, saying:

Damn! He just did a Rock Bottom in print! He continued by making the official announcement that he will not be returning to the franchise in any capacity, not even for the highly anticipated final installment, which is already in the works.

“I wish them well on Fast 9. And I wish them the best of luck on Fast 10 and Fast 11 and the rest of the Fast & Furious movies they do that will be without me.”

We guess there won’t be a Hobbes & Shaw 2: The Return Of Black Superman. Oh well. It wouldn’t be the first time a personal feud killed a franchise.

Whose side are YOU on in this epic beef??