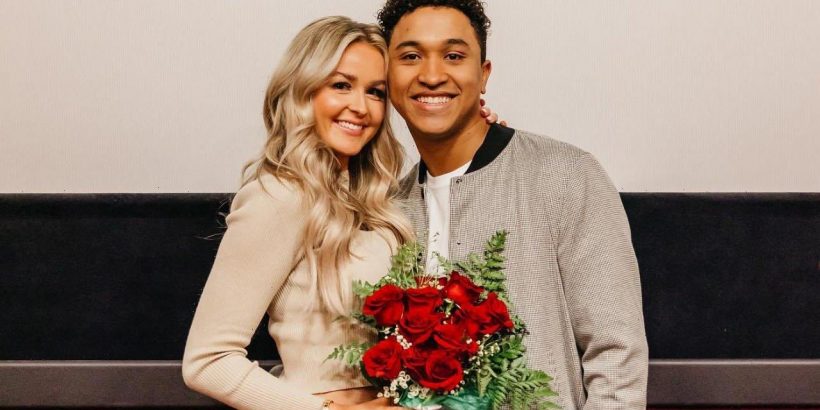 AceShowbiz -Congratulations are in order for Brandon Armstrong and Brylee Ivers. More than four months after getting engaged, the “Dancing with the Stars” pro-dancer and his fiancee finally tied the knot in a Utah wedding.

The couple said “I do” in front of 125 of their closest friends and family members on Saturday, July 30 at the modern venue Siempre. Earlier in the day, the pair had a religious ceremony.

Speaking about the nuptials, Brandon told PEOPLE, “Because so many people get married in Utah so young, we wanted something that was a little bit different than the traditional church, chapel wedding.”

Brandon and Brylee, who walked down the aisle to Elvis Presley‘s “Can’t Help Falling In Love,” were accompanied by 18 groomsmen and bridesmaids on each side. Among those in attendance were “DWTS” pros Lindsay Arnold, Witney Carson, Jenna Johnson as well as Emma Slater.

Brandon said he cannot wait to go on a honeymoon with his bride in the Dominican Republic. “I’m excited that I can commit to her and express my love to her and that I can do it in a way that I think is right,” he gushed. “A way that is good and loving and old school. I’m excited to show people she’s the love of my life and that I’m committed to her.”

Brandon proposed to Brylee on March 7. “I’ve been planning it for a couple months,” he revealed to PEOPLE of the proposal. “Brylee is big on memories. So I was thinking, what if I made a movie trailer that she could keep forever?”

“One of the first times we had a deep conversation was outside a movie theater,” he added. His now-wife then chimed in, “It was the first time he told me he loved me.”

Brandon admitted that he cried before he even popped the big question. “I wanted it to be perfect, as representative of what we’ve done so far, everything we stand for,” he explained. “I wanted it to be big and bright. But I’m not a good talker and crier. I started crying when the trailer came out and I knew I was screwed.”