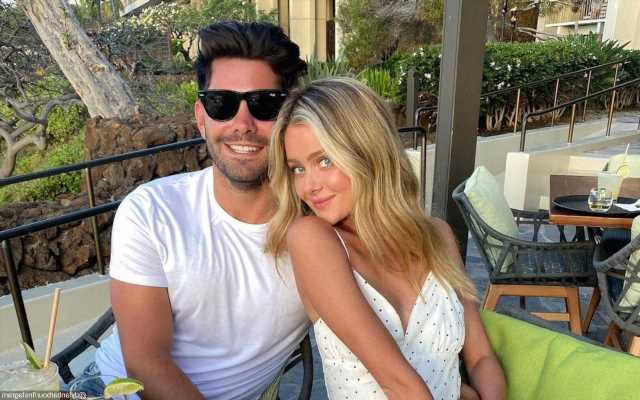 While the lovebirds, who got engaged is season six of ‘Bachelor in Paradise’, are taking their time to tie the knot, some fans are apparently angry over their delayed wedding.

AceShowbiz –Dylan Barbour and Hannah Godwin, who got engaged during season six of “Bachelor in Paradise” in September 2019, are happy with what they have now. While the couple is taking their time to tie the knot, some fans are apparently angry over their delayed wedding.

“You know what’s so funny? People get so, like, angry,” Hannah revealed in an interview with E! News while celebrating National Rum Day on August 16 with RumHaven. “They’re like, ‘When’s the wedding already? What’s taking you forever?’ TikTok especially gets angry and I’m like, ‘Are y’all that mad?’ We went through a pandemic.”

She went on to say, “We’re chillin. I think why we’ve been kind of cool with just chillin is because, like, we have a mortgage together. It’s funny how people get so angry. One day we’ll give it to them and they’ll be really excited hopefully.”

Dylan, meanwhile, shared when the two will be exchanging vows. “Spring 2023!” the Vizer app co-founder revealed. “It takes 12 months to plan a wedding, but we’re not gonna get married in the winter. We did look at venues. We have a planner.”

The engaged couple also said that they might invite 100-500 guests. While fans might hope to see some familiar faces among the guest, Dylan and Hannah said that they planned to have their closest friends that have supported them long before they appeared on the show.

“I think with our wedding and stuff being kind of pushed back, just the older you get, the more you grow, moving away to San Diego,” Hannah went on to share. “I wonder if it’s just like narrowing down our list, not in a bad way, but just kind of like this is who’s important in our life now, not just when we’re all over the place.”

That aside, the lovebirds are currently living the best of their lives in their new home. “They have the title spot on the bar cart that is right by the backyard,” Dylan gushed. “You have to walk directly by it. Everybody ends up just making a drink. We just get some like club soda, pineapple juice and some RumHaven and we chill back there.”