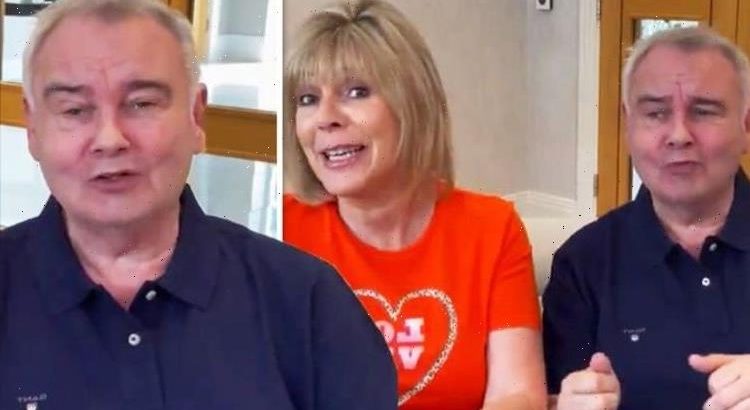 TV personality Eamonn Holmes, 61, has taken to Twitter to announce that he and his wife Ruth Langsford, 61, are “coming home” to present ITV’s This Morning while singing along to the Three Lions song. The pair excitedly announced the news ahead of the Euro 2020 final match on Sunday, which sees England play Italy at Wembley Stadium.

We’re back on the This Morning couch!

In view of his one million followers, the Irish star posted a short clip of himself and his wife of 11 years announcing their big news.

He wrote: “We’re coming home! @RuthieeL & I are back on the sofa for the Summer on @thismorning! Mon – Fri from July 12th, see you then!”

The favourite ITV presenting couple went on to drop huge news in the next line of the song, causing a frenzy among their fans.

“Eamonn and Ruth are coming home on This Morning,” they attempted to sing, before trailing off and realising that the lyrics didn’t quite fit the music.

“It doesn’t really work does it?” a perplexed Eamonn asked Ruth, as she agreed.

“It doesn’t quite work,” she added.

Confirming the news, Eamonn excitedly announced his and Ruth’s return to ITV breakfast show This Morning.

“Anyway we are! We are! We’re back on the This Morning couch!” he announced excitedly.

Jumping in, Ruth agreed and revealed that it would mark a full-time return to the small-screen for the pair.

“We’re really looking forward to it, [for] five days a week, “she added.

Turning to Eamonn she cheekily asked: “Can I stick you for five days a week?”

Confused, he replied: “Of course you can, what else would you be doing?”

“I haven’t seen you in ages, it’s going to be good to meet up with you again,” Eamonn quipped to his wife.

Jokingly, Ruth held out her hand and pretended to introduce herself to her husband.

“Nice to see you, lovely,” Eamonn joked before the clip ended.

Following the post, fans of the duo took to the comments to express their excitement at the news.

One wrote: “I am so happy. You have been sorely missed.”

Another added: “I only like it when you’re both presenting!”

While a third penned: “About time! Should never have gone. Glad This Morning management saw sense.”

Earlier this year This Moring viewers were surprised to see Dermot O’Leary and Alison Hammond replacing Eamonn and Ruth on their usual Friday slots.

Eamonn’s news comes as usual presenters Holly Willoughby and Phillip Schofield are now off for the summer holidays.