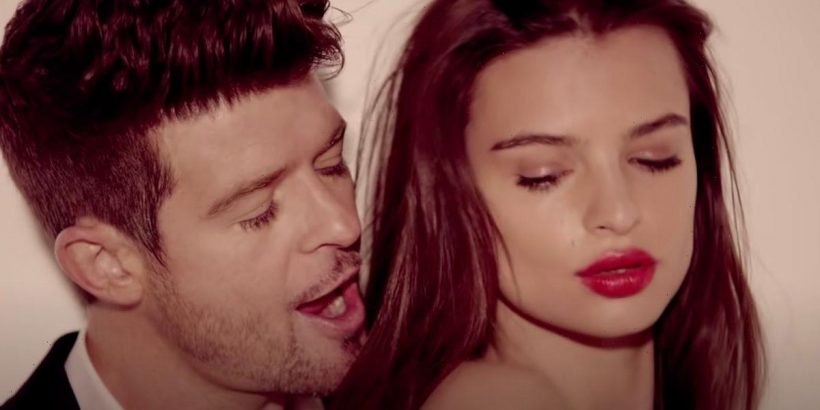 Emily Ratajkowski has claimed Robin Thicke "cupped her bare breasts" as they shot the music video for Blurred Lines.

The 30 year old model starred in the controversial music video for the song in 2013, which later became one of the best selling singles of all time.

Now, eight years after the music video went viral, Emily has alleged in her book that her breasts were touched by singer Robin Thicke as they filmed the video.

Writing in her new book My Body, Emily claimed: "Out of nowhere, I felt a stranger’s hands cupping my bare breasts from behind.

"I instinctively moved away, looking back at Robin Thicke. He smiled a goofy grin.

Emily, who recently gave birth to her first child, added that she felt "the heat of humiliation pump through" her body.

She added that she she didn’t speak out as she felt "desperate to minimise" the alleged incident.

The model recalled: "My head turned to the darkness beyond the set. (The director, Diane Martel’s) voice cracked as she yelled out to me, 'Are you okay?'

"I pushed my chin forward and shrugged, avoiding eye contact, feeling the heat of humiliation pump through my body."

Set director Diane Martel told The Sunday Times that Robin had allegedly been drinking and "sheepishly" apologised to the model.

She recalled: “I remember the moment that he grabbed her breasts, one in each hand.

"He was standing behind her as they were both in profile. I screamed in my very aggressive Brooklyn voice, 'What the f*** are you doing, that’s it. The shoot is over.'

"I don’t think he would have done this had he been sober."

Robin Thicke's representatives have been contacted by OK! for comment.

At the time of the video shoot Robin was married to actress Paula Patton, whom he shares 11 year old son Julian Fuego Thicke with.

Robin and Paula separated in 2014 and Paula cited in her divorce filing of his alleged abuse toward her, as was his drug abuse and infidelity, as reasons for the split.

Emily is married to Uncut Gems producer Sebastian Bear-McClard. And the couple welcomed their first child together, called Sylvester Apollo Bear, in March this year.

Stay up to date with all the latest on Emily Ratajkowski and many more stars by signing up to OK!'s daily celebrity newsletter.