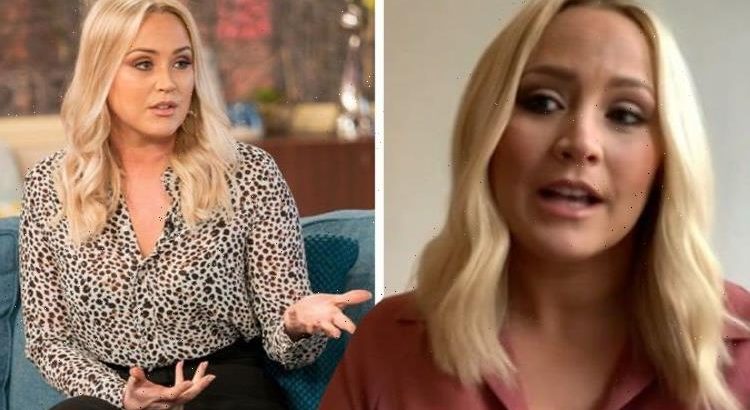 Emmerdale actress Amy Walsh, 34, opened up on her pregnancy fears ahead of giving birth to her first child, who she shares with EastEnders’ Toby-Alexander Smith. The TV star had convinced herself she may never be able to have children after she was diagnosed with polycystic ovaries, a condition that affects a woman’s eggs.

It was so bad, I couldn’t even get to the toilet!

Amy, who plays Tracy Metcalfe on the ITV soap, admitted how “lucky” she was to be told she had a “textbook pregnancy” by her midwife, something that initially came as a shock to the actress.

“With me having polycystic ovaries, I was worried that would affect things, but I had the sugar glucose test for gestational diabetes and that came back fine,” she explained in a new interview.

She added: “I did feel sick every day for 17 weeks but then I turned a corner.

“For three weeks I felt amazing and then I got pelvic girdle pain and that was rough.”

And on some days the pain was so bad that she “couldn’t even walk”.

“I was really upset and it was up to 25 weeks and I thought, ‘I’m not going to be able to do the rest of the pregnancy,'” she recalled.

“I decided to see a physiotherapist and an osteopath and the best thing I’ve done is kept up with that.”

Polycystic ovary syndrome (PCOS) is a common condition that affects how a woman’s ovaries work.

As stated on the NHS website, the main features of PCOS are irregular periods and excess androgen, which means there are high levels of “male” hormones in the body.

The ovaries also become enlarged and contain many fluid-filled sacs (follicles) that surround the eggs.

These sacs are often unable to release an egg, which means ovulation does not take place.

It’s difficult to know exactly how many women have PCOS, but it’s thought to be very common, affecting about 1 in every 10 women in the UK.

But while her due date gets ever closer, the soap favourite revealed she’s “weirdly excited” about the birth itself as she has always felt she was “made” to be a mother.

“I’m sure everyone who’s been through it reading this will laugh but it’s something I’ve always wanted to experience,” she told OK! Magazine.

She went on: “I’m very aware of how scary it could be so I know it won’t be a bed of roses, but what I’m most looking forward to is going through that journey with Toby.

“We’re a really good team and I know we’ll thrive off whatever is thrown our way,” she beamed.

The pair have started online antenatal classes, but Amy admitted she doesn’t have a plan as yet.

“It’s not in my nature to plan and any sort of plan would be setting me up for disappointment,” she giggled.