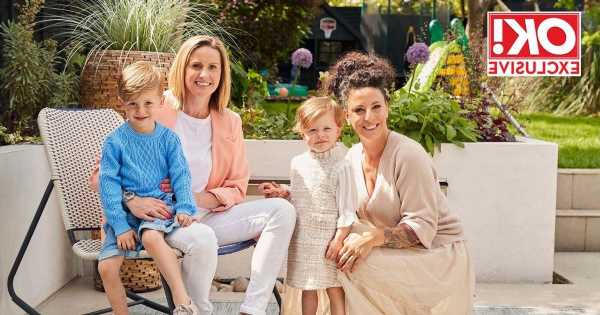 Kelly Smith is one of the most successful footballers our country has ever produced and has an equally triumphant home life, and lives happily with her wife DeAnna Dobosz and their two adorable children Rocco, four, and two-year-old Lucia.

Although DeAnna explained in our exclusive shoot at their home in North London that former England skipper Kelly worries about the children getting picked on because they have same-sex parents.

"But I’m confident if we give them the confidence and education, they’ll be fine," she continued.

"They’re surrounded by so many different, diverse people. Rocco understands. When he’s older, if he’s interested in exploring his biological father, we’ll make that work."

In terms of how they're teaching their little ones about their family set-up, DeAnna added: "We’re reading them books about how all families are different.

"Some kids have two dads, some have two mums. A lot of our friends are two mummies as well."

While Kelly, 42, replied: "I don’t know how many same-sex couples there are in Rocco’s nursery though…"

And the parents, who welcomed both children by IVF donor, tell us they've ruled out further expanding their brood, after a difficult lockdown.

"We have one embryo left," Kelly explained.

"If we were younger when we met and started the IVF journey, we’d have had another one. But raising them in lockdown has been tough and it’s made us realise we’re good. We have one of each, so it’s perfect."

Kelly also opened up about her coming out story, revealing that she didn't "publicly acknowledge" her sexuality until after her retirement in 2015.

"Teammates of mine knew and I was comfortable with it, but I just never acknowledged it publicly," she said.

"Homophobia isn’t something I’ve personally experienced in the game, I just wanted to stay private. But when I met DeAnna I knew she was the one, so I just relaxed.

"It was like a big sigh of relief – I didn’t care what anyone thought. I suddenly felt really comfortable in speaking about it and I’ve never looked back."

Read Kelly and DeAnna's full interview – and see all the stunning pictures from their family OK! shoot – here.