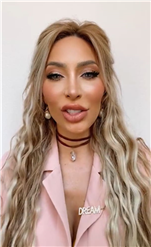 Sooner or later, she always either gets super racist or goes off on an unhinged rant. Or both.

This time, Farrah is lashing out at her fans and accusing them of not letting her daughter be a kid.

Interestingly, that is the accusation often levied at Farrah herself.

Many children, even those whose parents are Teen Mom stars or alums, lead relatively normal lives.

Even being on camera, even with their parents’ TV incomes, they are able to make friends like regular children.

But not so with Sophia, Farrah’s 12-year-old daughter.

Sophia is “homeschooled,” though both the word “home” and “school” are used fairly loosely here.

Farrah takes Sophia with her all over the world and has done so for years.

And fans have real doubts over whether Farrah could conceivably be capable of effectively educating … anyone.

But right now, fans aren’t going after Sophia’s lack of normal socialization that is vital to human development.

Nor are they, at this exact moment, furious with Farrah’s constant use of Sophia as a prop to promote her brand.

Farrah showed off Sophia with a dramatic blonde dye-job.

Fans poured in to comment their concern about potential damage to Sophia’s hair.

Others worried, as is often the case, that Sophia is growing up just a little too quickly.

There is a very nuanced conversation that can be had about dying hair.

It can be appropriate for a preteen to have their hair dyed, though only in some circumstances.

Unfortunately, nuance is not something that comes naturally to Farrah.

“No,” Farrah fired back, “Sophia professionally gets her hair done.”

“Let kids be kids!” she then parrotted what she herself is so often told.

“Further lies and hate are not tolerated on this account,” Farrah then announced.

Clearly, that was not enough.

She then informed a fan that they were blocked.

Or, rather, she wrote “your blocked,” but unlike Farrah, everyone could understand what they were reading.

Farrah blocking someone is fine. Blocking is always a fine choice.

However, her decision to go off on a commenter was just … weird.

Once again, her short fuse was rearing its ugly head.

Speaking of Farrah, we have to mention one of her recent Instagram Stories.

She was going off on haters with a weird filter over her face.

But notice how she seems to be on a swing while inside an opulent bathroom?

However, fans believe that the swing that she was seated on might be a very fancy sex swing.

Alternatively, it could simply be a luxurious bench in the shower and a helpful tool for the disabled … right?

Or it could be a sex swing, for sex reasons.

Of course, even if it was … did Farrah have any idea?

We are all painfully aware, Farrah’s brain does not quite work like everyone else’s. She can be weirdly clueless.

Farrah does not really have a filter, and she can go on unhinged rants at the drop of a hat.

She would do well to have a filter between her and followers, a moderator capable of impulse control and sentence-writing.

But that would be a good decision, and Farrah doesn’t seem to make those.