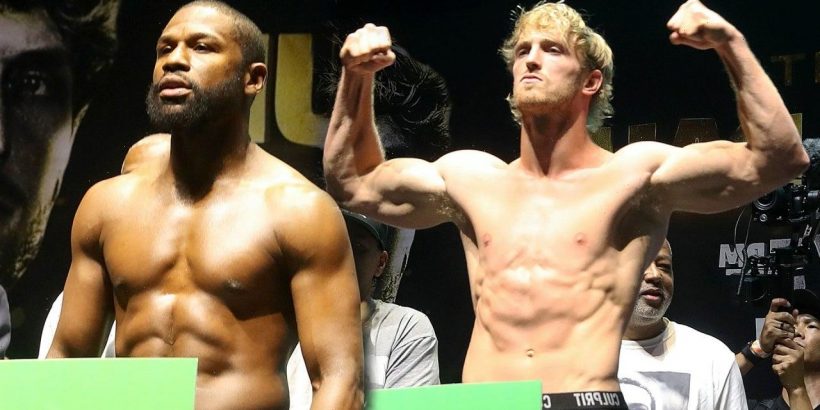 It was known heading into the Showtime pay-per-view fight between Floyd Mayweather and Logan Paul that no winner would be announced if the exhibition went the distance. That likely won’t take anything away from Paul, who can claim something of a moral victory after managing to last all eight rounds with one of the greatest boxers of all time on Sunday night inside Hard Rock Stadium in Miami Gardens, Florida.

Mayweather was clearly the better fighter, as was expected, but Paul utilized his huge height and weight advantage to lean on Mayweather and avoid taking more than one or two clean shots at a time from the former multi-division world champion.

“I had fun,” Mayweather said after the fight. “You’ve got to realize, I’m not 21 anymore but it’s good to move around with these guys.”

Trading blows in round 4 💥👀 #MayweatherPaulpic.twitter.com/jrAn0Vzo9R

Mayweather was highly cautious early, looking to figure out what Paul brought to the ring and also attempting to avoid taking any clean shots from the YouTube star. Paul entered the ring well over 30 pounds bigger and with a six-inch reach advantage.

After playing almost exclusively defense in the second round, Mayweather finally turned up the offense in the third, opening up with some clean left hooks that rocked Paul’s head back and mixing in the occasional overhand right.

Despite “Money” starting to find space to land clean shots, whenever Mayweather would seem to get his offense on track, Paul would clinch, smother and lean, making Mayweather carry his weight.

“He’s better than I thought he was,” Mayweather said. “As far as with the big guys, the heavyweights? It’s going to be hard. But he’s a tough, rough competitor.”

Paul appeared to fatigue down the stretch, losing what snap he had on his punches to open the contest and pouring sweat as he flicked out jabs that Mayweather was mostly able to easily avoid while the boxing icon picked spots to land scoring blows.

Despite what would have been a clear loss had judges been in attendance, Paul was elated after going the distance.

“S**t, man, I don’t want anyone to tell me anything is impossible ever again,” Paul said. “The fact that I’m in here with one of the greatest boxers of all time proves the odds can be beat.”

The fight drew boos from the crowd at times, with those in attendance wanting a definitive finish via knockout, but that level of action never came and neither man appeared seriously hurt at any point in the clash.

Paul seemed to share some of the questions the fans had with how seriously Mayweather was approaching the battle.

“I mean, you never know with this guy,” Paul said. “I’m going to go home thinking, ‘Did Floyd let me survive?’ It’s an honor to grace the ring with him. This is the coolest thing ever.”

"@FloydMayweather it's an honor."@LoganPaul was hyped after surviving 8 rounds. #MayweatherPaulpic.twitter.com/wGNbYmlSk0

This story was originally published by CBS Sports on June 6 at 8:48pm PT.

Watch Logan Paul Workout Ahead of Fight Against Floyd Mayweather