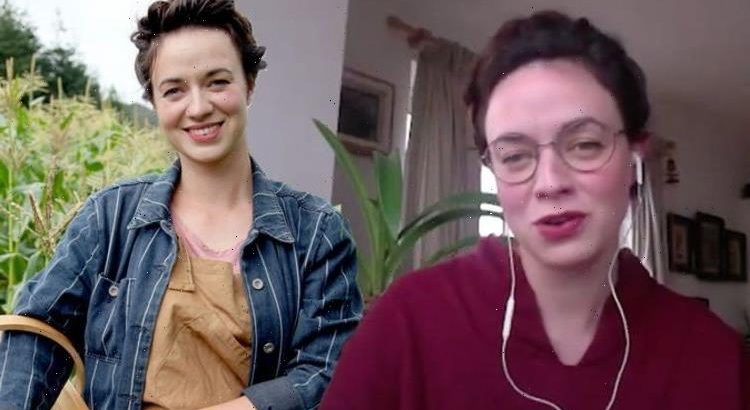 Gardeners’ World presenter Frances Tophill has addressed how her wardrobe choices for the BBC programme help avoid any awkwardness. The broadcaster admitted that despite being provided with hair and make up, she has her tricks for stopping wardrobe malfunctions.

The 32-year-old addressed the moment her cardigan caught the attention of viewers across the nation.

Currently, Frances works as a freelancer across various programmes on networks such as ITV and the BBC but was stunned when she discovered she had been provided with a wardrobe assistant as well as hair and make up.

The horticulturist admitted she was shocked to discover that despite being “in the mud all day”, alongside her female co-stars, she would go through makeup.

Frances also explained how she avoids wardrobe malfunctions in front of the camera that would leave her red-faced.

Speaking on the Kitchen Garden Magazine Podcast, Frances said: “I find it a funny thing to talk about fashion sense because I’ve just never thought about it.”

The gardening expert added: “I just wear what I wear and dungarees are good for working because you don’t get to builders bum!”

She later went on to say: “It’s a funny thing because I think that, especially as a woman in gardening TV, you are expected to wear makeup.

“I know that on Love Your Garden we have a makeup artist, you know your hair and makeup when gardening landscaping all day in the mud, just no.”

Frances continued: “I wouldn’t bother but it’s, it’s a very, I don’t want to say it’s a sexist industry but there is definitely a thing where you were like, as a woman you were expected to have that.

“When we first started Love Your Garden we used to get given what clothes to wear as well, just, I don’t think the men did.”

“So, I started off coming into TV wearing not my clothes, wearing what someone else told me to wear,” she explained.

Frances went on to admit that she managed to start sneaking her own personal clothes into her filming wardrobe.

“After a year or two, you sort of start sneaking in a bit of your own thing and just because it makes you because you feel comfortable in your own clothes,” she said.

The Kent-born star added: “It’s that confused thing of wearing one half of what someone told me and the other half of mine.”

“Well people ask me this now and again, and I have never really thought about it,” she explained.

The brunette beauty continued: “But I was watching Channel 4 news yesterday and there was an advertisement for Sandy Toksvig, who is doing something with Channel 4 and she is obviously on BBC, on BBC Radio.

“So obviously it does happen more now. I notice it now whereas I never would have thought about it before, but it’s quite nice from my perspective to get the freedom to do the things that I want to do.”

Elsewhere, Frances made a subtle hint to co-star Monty Don, to allow her on his famous programme Around The World In 80 Gardens.

Admitting she “loves” to travel, she hinted it would be her ideal programme.

You can listen to the full podcast with Frances Tophill here.