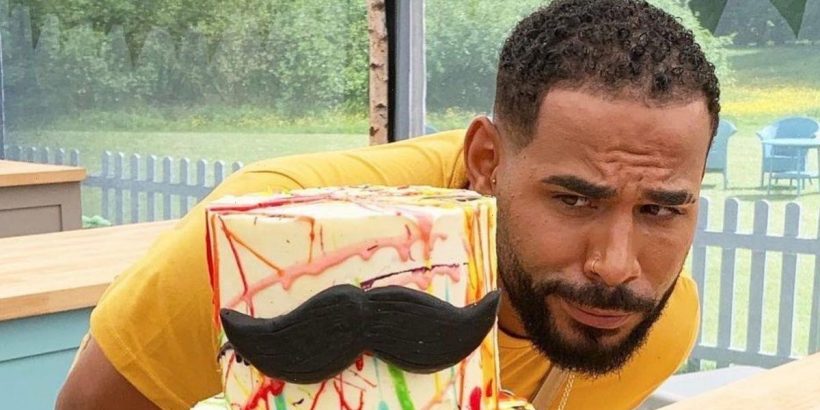 He left fans hungry for more after the series finale of The Great British Bake Off, so it’s unsurprising that finalist Sandra Farmhouse is continuing to set hearts aflutter outside of the tent.

The 30-year-old, who moved to the UK from Angola as a small child, shared his new haircut to fans, via Instagram yesterday.

Describing the look as “fresh”, the amateur baker who charmed the nation's hearts also showed his luxurious manicure, which featured gold tips.

The colour perfectly accentuated the gold jewellery that Sandro wore, including his iconic nose ring. However, Sandro was far from done with his makeover as the baker also indulged in a hydro facial later that day.

In spite of being described by some viewers as the hottest Bake Off contestant ever, Sandro isn’t as enthusiastic about his appearance.

Sharing the experience on his Instagram story, Sandro invited fans to accompany him during the pampering session.

“Alright, it’s that time guys…I’m just waiting for the lady to come back and sort THIS out.”

“I need a glow. I need glow.” He joked, before cheekily poking his tongue out to the camera.

The treatment began with a gentle foam cleanse, before the beautician began to use more intensive tools, including a pore vacuum to remove debris from Sandro’s skin.

Viewers couldn’t help but watch as the Bake-off contestant remained incredibly zen as the device gently tugged at his skin.

Keen to share the contestant’s beauty secrets, his beauty therapist explained the treatment in more depth as she hoovered LED light over his face.

Although she remained anonymous throughout, the beautician did state that the red lighting was good for “skin rejuvenation, blood circulation and keeping the wrinkles away.”

Never one to miss a joke, Sandro quickly responded with “Wrinkles away guys…wrinkle away guys…”.

In fact, Sandro appeared to already have a glow despite being only halfway through the procedure, as a mixture of antioxidants and peptides were applied to his face.

As he finished the treatment, Sandro was clearly impressed.

“Oh wow…” He exclaimed, before adding: “It looks like I’ve got filter on…”

After such a punishing series of bakes, it’s no wonder the baker wanted a little downtime. Sandro certainly deserves it after not only a gruelling season but working hard as a volunteer for charity, Beyond the Cakes.

The group support children with special needs, mainly autism, with workshops which help to build their confidence and their culinary skills.

Speaking about this, Sandro told press: “Social Ark has introduced me to real community leadership. I am passionate about creative baking and supporting children and young people with special needs to flourish.”

"I’m full of aspirations and really looking forward to the future, being part of Social Ark and wherever my baking journey takes me.”