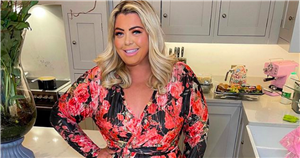 Gemma Collins has revealed her latest fascination with ice chambers after discovering the method on her weight loss journey.

Diva Forever star Gemma, 40, recently shared a clip of herself undergoing thermal shock cryotherapy in an ice chamber on her Instagram page.

And, after her trip to the ice chamber The GC, who recently ripped her dress as she partied at the Brit Awards, revealed she now wants one for her home.

Speaking in her BBC Radio One podcast, titled The Gemma Collins Podcast, the Essex-based diva explained: “I’ve been doing some really cool stuff. I went into an ice chamber and, yes, I was naked.

“It was minus 188C. But, what it does is it freezes your body and it starts getting rid of all your fat.

“I actually want one put in my house. I want to go in it all day every day.”

Gemma, who recently revealed she’s received signs from friend Rhys Alan Smith after his tragic death, added that she thinks she could multitask while in the chamber

Former The Only Way Is Essex star Gemma added: “I started thinking I need to start working from the ice chamber, because I can kill two birds with one stone and literally shed the excess fat that’s swirling around in my body and get all my work done, so yeah, I need to get an ice chamber guys!”

Health spa Le Chalet Cryo’s director Lenka Chubuklieva previously told The Express of cryotherapy: “Because you’re exposed to such low temperatures your metabolic rate increases to keep you warm, and as a result you get the calorie burn and improved metabolism.

“So cryotherapy is useful as weight loss aid in combination with training and good nutrition.”

Gemma also opened up about transforming he lifestyle, after losing three stone in weight.

She told podcast listeners: “So after a tough couple of weeks I have been reflecting on how important it is to look after yourself and I found myself going to bed earlier, I found myself throwing myself into my fitness and really trying to keep healthy.

“I’m so mindful about what I’m putting into my mouth these days – I love cakes but I don’t eat them anymore, well I’m not going to give them up forever. But, after working out you just thing: ‘That but of cake that’s another hour of doing squat thrusts with weights, hell no it is not worth it!’”