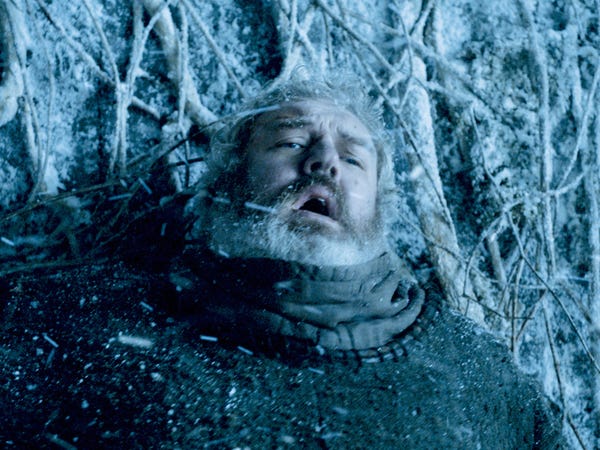 In "Fire Cannot Kill a Dragon," a new book about "Game of Thrones" written by Entertainment Weekly's James Hibberd, we finally learn a few more details about how Hodor's death will shake down in the books. George R.R. Martin's plan for the scene involves a sword from the crypts of Winterfell, with Hodor "fighting and killing" attacking enemies.

"They did it very physical — 'hold the door' with Hodor's strength," Martin said in Hibberd's oral history of the show. "In the book, Hodor has stolen one of the old swords from the crypt. Bran has been warging into Hodor and practicing with his body, because Bran had been trained in swordplay. So telling Hodor to 'hold the door' is more like 'hold this pass' — defend it when enemies are coming — and Hodor is fighting and killing them. A little different, but the same idea."

Fans of the show who haven't yet read Martin's published books might need more context for how the novels will tackle this scene, so let's take a closer a look.

First, let's recap what happened to dear Hodor in the show's version of events.

Most fans will never forget the shocking revelation pulled off in "Game of Thrones" season six when we learned the tragic reason why Bran Stark's companion Hodor only ever uttered the word "Hodor."

It turned out that Hodor was once a stable boy named Wylis who lived in Winterfell. He only transformed into "Hodor" when the young Bran Stark — far in the future — accidentally used his skinchanging magic to connect the past and future together.

"It's like when your iPhone's connected to your Mac and it [automatically opens] iTunes — then you pull it out just as it's syncing and everything goes haywire," Isaac Hempstead Wright (who plays Bran) once explained to Insider.

That "haywire" magic led to Young Wylis watching his future self dying as he physically held a door being attacked by a horde of wights. The trauma left him able to only say a broken-down version of "hold the door" or "Hodor."

If you need a more in-depth refresher on what happened in this scene, you can read our full breakdown here.

Back in 2016, Martin reportedly told a room of fans that there would be a difference in the books, but he didn't give specifics

In the "Game of Thrones" episode's post-interview video, showrunners David Benioff and D.B. Weiss said author George R.R. Martin had told them about his planned twist reveal of how Hodor got his name. Then just one night after the episode aired a fan on Reddit posted a recap of an event they had attended where Martin reportedly said that the name reveal would be different in the books.

As Vanity Fair's Joanna Robinson reported at the time, the fan wrote that "his name reveal in the books will differ in the context and how it happens. So while the name will still mean the same thing (Hold the Door), it will be very different from the show's reveal."

Martin is teasing out more details that will come to fruition in 'The Winds of Winter,' the next planned book in his series

"Game of Thrones" infamously wound up overtaking Martin's published novels. Now Martin still has plans to complete two more books in the "A Song of Ice and Fire" series. He's been working on the sixth book, "The Winds of Winter," since 2011.

At the end of the last-published book, Bran is still in the North with Hodor, Meera, and the Three-Eyed Raven. Jojen is very likely dead, and possibly being mashed into paste and fed to Bran, but that's a fan theory for another time.

As Martin mentions in "Fire Cannot Kill a Dragon," his books include the detail that Hodor has taken a sword from the crypts of Winterfell. The group carries it with them for protection as they venture beyond the Wall. As Bran practices his skinchanging, or "warging" as it's more colloquially referred to, he sometimes enters Hodor's mind and takes over his body.

Martin did not divulge more about the context of the attack that will take Hodor's life, but he has now revealed the way he will be fighting much more directly with whatever enemies are approaching Bran.

"So telling Hodor to 'hold the door' is more like 'hold this pass' — defend it when enemies are coming — and Hodor is fighting and killing them," Martin said in "Fire Cannot Kill a Dragon."

"Game of Thrones" writer and coproducer Dave Hill was also interviewed for the book, and explains why the show changed up this plan slightly. It was much easier to get the audience to understand the verbal transition with a literal door.

"For our purpose, holding the door is visually better, especially because we have so much fighting," coproducer Dave Hill said in the book.

Martin's original plan may seem like a small detail, but it's certainly one that book readers will be interested to know

As "Game of Thrones" pushed past Martin's completed books, fans became more and more fascinated to learn what the author had told Benioff and Weiss about his plans for the ending, and which aspects of that outline were actually applied to the show.

Now we're left with the bigger mysteries, like will it be White Walkers attacking Bran in the books? Will Summer really die beyond the Wall, too? And what about Meera, Jojen, and the Three-Eyed Raven?

Martin's coming novels will have many other threads that differ from the story told in the later season of "Game of Thrones." For a full look at why the show didn't spoil the coming events of "A Song of Ice and Fire" as much as you might have thought, read our analysis here.

In the meantime, Martin says he's working more and more on "The Winds of Winter" with every passing month. There's been no estimated date of publication.