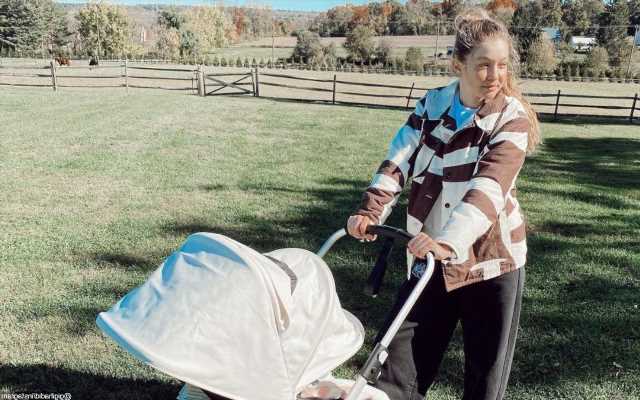 In her photo dump, the supermodel shares cute new photos of her 11-month-old daughter Khai, whom she shares with Zayn Malik, ahead of her first birthday in September.

AceShowbiz –Gigi Hadid is treating her fans and followers to new photos of baby Khai. Ahead of the first birthday of her 11-month-old daughter, the supermodel shared some cute candid images of her little girl.

On Tuesday, August 31, the 26-year-old beauty took to her Instagram account to share a photo dump of August. Among the pool and floral snapshots, baby Khai could be seen in slides five and six featuring snaps taken at Gigi family’s farm in Pennsylvania.

In one black-and-white snapshot, the model could be seen carrying her daughter, whom she shares with her beau Zayn Malik, as they approached a horse pen on the property. In another, an aerial shot captured blocks that spelled out “11 months” as the little girl approached the toys. Zayn was also featured in her photo dump, holding up red chilis from a garden.

Gigi and Zayn announced the arrival of baby Khai in September 2020. At the time, the former One Direction member tweeted, “The love i feel for this tiny human is beyond my understanding. Grateful to know her, proud to call her mine, & thankful for the life we will have together.” In the meantime, the runway beauty shared via Instagram, “Our girl joined us earth-side this weekend and she’s already changed our world.”

The couple is notoriously known for keeping their daughter’s privacy. In July, Gigi penned an open letter to the press, paparazzi and fan accounts asking them to keep their distance when she took Khai out in the city. “On our most recent visits to New York, she has started to want her sun shade lifted up and helps herself to it! She doesn’t understand why she’s covered in the city, or what I’ve wanted to protect her from,” she wrote.

“I also want her to see the most amazing city in the world + the beautiful and diverse people that walk down the streets of NYC… that is, without the stress of the media circus that comes with parents who are public figures,” Gigi continued. She then added that as a new mom, she “just wants the best for [her] baby” and thanked paparazzi who have been “respectful” of keeping their distance.