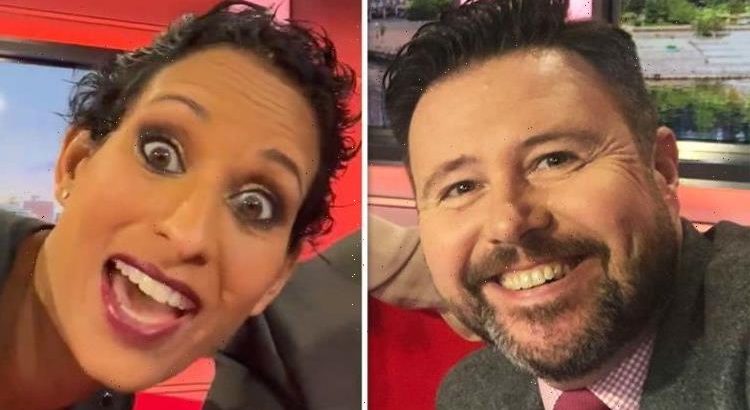 Naga Munchetty gives blood and urges fans to do the same

There was plenty of excitement in the BBC Breakfast studio this morning as journalist Ben Boulos, 37, made his hosting debut. Ben had teased his new role and fans were thrilled to see him on the sofa.

Yesterday, he posted a beaming selfie and told followers he had “something VERY exciting” happening for the first time.

He kept his new gig under wraps and teased followers with a series of clues instead.

First, he shared a video pointing outside a train window as he departed from London, but kept his destination a secret.

The presenter followed with a snap of a train board which revealed he was on his way to MediaCityUK in Salford, the home of BBC Breakfast.

He also added a selection of photographs from outside the Quay House studio which were taken so early in the morning it was still dark outside.

Finally, he put fans out of their misery and revealed he is the latest replacement host to join the BBC morning show.

In a clip to his 11,000 followers, Ben showed off the studio behind the scenes and captured presenters Naga Munchetty, Jon Kay and Mike Bushell preparing for the broadcast.

He said: “Well here is one last clue.

“I am on the famous red sofa. I’m in Salford, with me Naga, Jon, Mike.

“It’s almost six o’clock so yes, you guessed it, I am very excited. I hope you can join us.”

Naga then popped her head in shot and exclaimed: “It’s going to be so much fun!”

His debut has been met with rave reviews from viewers.

Andy Suthers echoed: “You were magnificent. Already imagining you on Strictly!”

Ben is best known for specialising in business on BBC News as well as being one of the main relief presenters for BBC World News.

The presenter, whose real name is Ben Bland, decided to change his name to Ben Boulos, his mother’s surname, in February last year.

He said he made the decision to change his professional name due to another journalist having the same name causing confusion.

He told the BBC that he has received some social media messages meant for the other Ben Bland, “some pleasant, some hostile”.

Ben also said he wanted to change his surname to convey “a more complete picture of who I am and the influences on my life”.