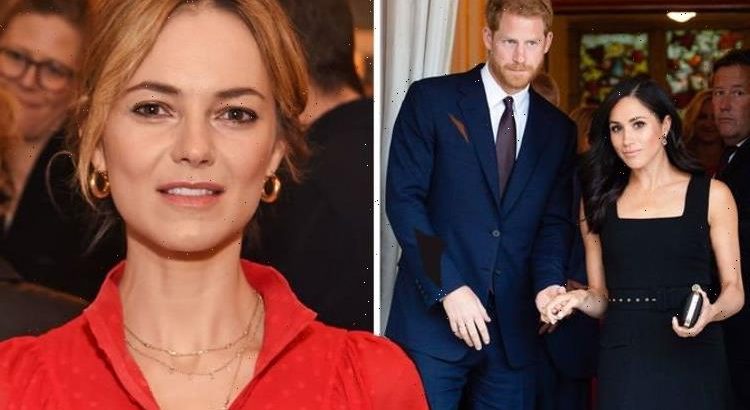 Kara Tointon says she ‘loves’ being a mum during 2019 interview

English actress Kara Tointon, 38, is currently playing the Duchess of Cambridge in the West End play The Windsors. And now the former soap star has shared her thoughts on the Royal Family and in particular the Duke and Duchess of Sussex, who stepped back from their roles as senior royals last year.

When asked for her thoughts on the on-going drama surrounding Prince Harry and Meghan Markle, Kara wished them well following their move to America.

“My only observation and my only thought is, good luck to them all.

“I wish them all the best of luck,” she told OK! magazine.

The couple stepped back from their royal duties in March 2020 and now live in California with their two children.

Kara is playing the role of Kate Middleton at London’s Prince Of Wales Theatre in The Windsors: Endgame.

She told the publication that she had never met the 39-year-old royal but had met other members of the family.

The mum-of-two said she hoped they would see it as “light relief”.

“I’ve met Prince Charles and Prince Harry but not Kate. I think they’d all find it quite amusing as I don’t think they take themselves that seriously and it would be a bit of light relief for them, too,” she said.

The actress found fame in 2005 when she landed the role of Dawn Swann in EastEnders.

She played the part for four years, with her final appearance airing in the summer of 2009.

The following year she won the eighth series of Strictly Come Dancing with her professional partner Artem Chigvintsev, who she went on to date.

The couple are parents to sons Frey, two, and Helly, eight months.

The mum-of-two shares regular updates of her work and home life on social media.

She marked Father’s Day earlier this year, with some adorable snaps of her family, while praising her fiancé.

“…and Happy Father’s Day to you my darling. You were made to be a Dad.

The accompanying images showed the foursome spending time together and enjoying a day at the seaside.

The Windsors: Endgame also stars Harry Enfield in addition to many of the stars who appeared in the Channel 4 show.

It runs from now until October.