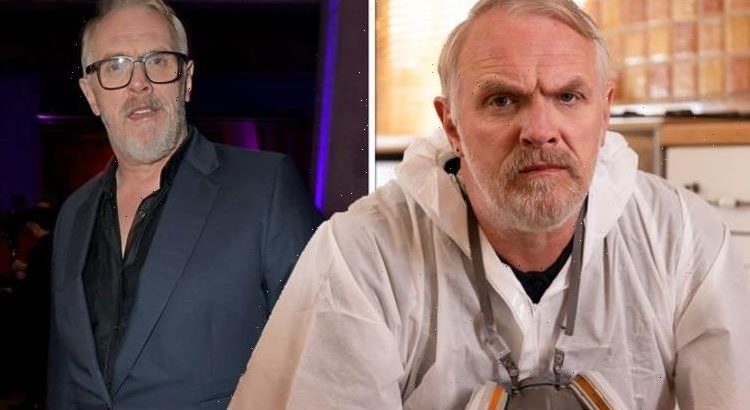 Greg Davies is returning to screens this month in his new BBC comedy series The Cleaner. However, the star recently opened up to Express.co.uk about political correctness in comedy and how it’s not stopped him from “being edgy” on stage or screen.

Speaking during a recent Q&A, the Taskmaster star was questioned if political correctness has killed comedy.

The comic wasn’t so sure as he replied: “No, I don’t think so. It depends.

“This is a debate we can have. It depends very much on your definition of political correctness, doesn’t it?

“But my feeling is, my interpretation of political correctness is just avoiding saying things that are clearly awful.”

“So, for me, political correctness isn’t ruining comedy, and it certainly hasn’t changed the sort of things that I would say.”

The star also explained how he didn’t have to change anything in his new series at the request of the BBC.

The dark comedy follows Wicky (played by Greg) who is a cleaner responsible for scrubbing up blood from crime scenes.

As a result, there are plenty of gory moments in the show, which Greg said they didn’t shy away from.

He explained: “I think there’s a fairly healthy appreciation of black humour in this country.

“I never felt like we’ve danced over the line of taste or more importantly, were disrespectful to the notion of people dying.

“I don’t know. It’s never been a consideration to me that we were tasteless in any way.

“And I think, as I’ve said before, BBC One audiences won’t be shocked by this.

“There’s nothing especially shocking with the murder scenes and the topics.

“Well, I could be very wrong, I don’t think it’s upset anyone.”

The show, which begins on September 10, also features a host of famous faces.

Some of the stars include Helena Bonham Carter, David Mitchell and Ruth Madeley.

The series is inspired by the German series Der Tatortreiniger and has been adapted to English by Greg and his team.

The revolving cast of characters will feature everyone from the victims’ relatives to the murderers themselves.